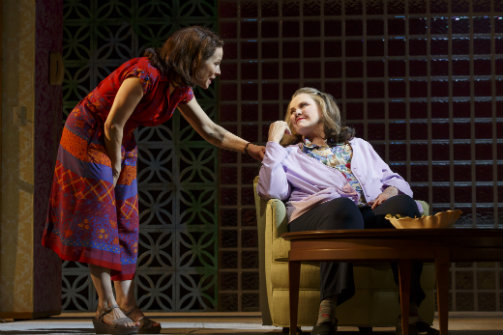 BOTTOM LINE: Fans of subtle acting will find much to enjoy in Roundabout’s production of a play that is quiet and simple, but deceptively so.

It’s an often unacknowledged fact of life, one many of us try to forget until it stares us in the face—at some point, a parent or other family member whose health is declining will need to be cared for. These events require difficult, perhaps life-altering, choices, with effects that may well linger for years to come. Such is the case in Marvin’s Room, the 1990 play that has been a staple of regional theater for years, and is now making its Broadway premiere.

The titular Marvin, although played by an actor (Carman Lacivita), is heard, but never seen. A stroke victim, for years he’s been cared for by his daughter Bessie (Lili Taylor), but as the play begins, Bessie has been experiencing fatigue and some odd bruising—clear signs that something isn’t what it should be. And once Bessie is diagnosed, her estranged sister Lee (Janeane Garofalo) comes to visit, bringing her two kids, young Charlie (Luca Padovan) and the troubled Hank (Jack DiFalco), in the hopes that one of the three might be the match necessary for a life-saving transplant.

As it is increasingly clear that Bessie is seriously ill, the question about what do with Marvin becomes more pressing, although to McPherson’s credit, it never overwhelms. Illness here is more a fact of life than a crisis, a theme made clear by the fact that Bessie and her father aren’t the only ones who are sick in one way or another. Indeed, it’s a play in which the “less sick are caring for the more sick,” echoing McPherson’s own life in 1990, as he, his lover, and many of his friends were all dying of AIDS. Yet Marvin’s Room isn’t so much an “issue” play like other “AIDS plays” of the period, but more one that dramatizes the mundane and the day-to-day; these are regular people living regular lives who are forced to deal with regular problems. Life is messy, and it often kind of sucks, and while you will probably make a lot of mistakes, you struggle on the best you can.

If this all sounds a bit glum, it’s enlivened by McPherson’s sense of humor; one of the best things about the script is the way McPherson captures the irreverent silliness that comes with long-term home health care. And if this silliness seems a bit forced at times—as it does with Bessie’s almost too absent-minded Dr. Wally (Triney Sandoval)—it ultimately serves as the necessary counterpoint to the serious moments, so that the increased gravitas of the second act really hits home.

There isn’t anything really ground-breaking here; if Marvin’s Room is a solid play, it isn’t an especially challenging one, and in lesser hands the whole thing could get a bit humdrum. Fortunately this is a great cast, especially Celia Weston, who is sheer delight as Bessie’s warm-heated but daffy Aunt Ruth, a woman with an infectious enjoyment of soap operas, and whose electric “cure” for her chronic pain interacts to hilarious effect with the garage door. Taylor and Garofalo work exceptionally well as estranged sisters, each somewhat resentful of the other’s life choices. Taylor’s quiet intensity helps deepen what could otherwise be a one-note, sad-sack character, and Garofalo captures well the harried nature of a mother who is at wits end with her teenage son. And as this teenage son, Jack DiFalco is outstanding. It’s difficult to get beyond the clichés of “troubled teen” but DiFalco does this masterfully; his scene with Bessie in the second act is the clear standout of the evening, and (not to oversell) perhaps reason alone to see this production.

Less effective is Laura Jellinek’s set design. Jellinek, who has mostly done sets for Off Broadway shows (including last season’s astounding set for A Life), seems to flounder here. Things start out well, with a revolve helping to transition between doctor’s office, family house, and the “loonybin” where Hank begins the play. But as the locations increase, the set becomes more and more jumbled, with furniture at times being taken off, but at other times staying on, seemingly for no rhyme or reason. By the time we get to the family’s trip to Disney World (which here reads as a sad, off-market version designed from the discarded remnants of a traveling carnival), the whole stage is a bit of a mess. One gets the sense that perhaps there is some sort of conceptual underpinning to the whole thing, but if so, it isn’t clear what that might be. And when a concept leads to design that becomes distracting (during a key scene I was focused more on the slowly spinning revolve than on the actors), that concept might be misguided. What’s worse, the design forces staging that feels off-balanced, with many key scenes played stage left (I thus advise sitting either center or house right). Jellinek and director Anne Kauffman are clearly used to working on much smaller stages, and it shows.

If you’ve seen Marvin’s Room before, either regionally or on screen (the 1997 movie starred Diane Keaton, Meryl Streep, and Leonardo DiCaprio), I won’t say that it is essential viewing. But it still works, and thanks largely to the cast, it is at times incredibly powerful. Given that health care in the United States is more precarious than ever, and that conversations about caring for sick loved ones will likely play out more and more in the next few years as the current administration torpedoes the modest improvements of the ACA, Marvin’s Room may prove to be as relevant now as it was during the height of the AIDS crisis, if not more so.