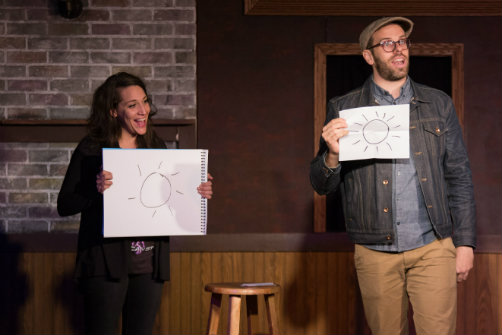 BOTTOM LINE: Mark Toland reads the minds of the audience, showing off incredible talent and bringing a signature honest dishonesty that exposes a raw sense of wonder.

Mark Toland is, in fact, a mind reader. He performs feats of mental magic in a spot-on grown-up magic show that is sure to delight nearly everyone. His show is fun, exciting, and fascinating, and Toland never misses a beat as he blows your mind. But spoiler alert: Mark Toland is not a psychic.

See, Toland's take on mind reading is a little different: he approaches it not as a mystic, but as a skeptic, front-loading his skills in no uncertain terms by informing the audience that this is a trick. In a monologue halfway through the show he tells a story about a time he was almost taken in by another skilled reader, and qualifies his "how does he do it" persona, saying "at least I'm honest about my dishonesty." He won't tell you how he's done it, but make no mistake, these aren't magic powers on the stage, just mystery—"without the supernatural bits." In these moments of storytelling and introspection, beautifully crafted monologues that would find a home in a Tennessee Williams script, Toland exposes a sincerity and vulnerability that only heightens the sense of wonder his illusions spark.

And cultivating that sense of wonder is Toland's mission, one from which he never deviates. The show is divided in two. In the first half, Toland "takes thoughts out," performing impressive math tricks and discovering the names of first crushes and favorite places as he talks, writes, and gestures at breakneck speed. The show features expert misdirection and goofy props, with Toland babbling like an auctioneer as he moves seamlessly from one trick to the next. In the second half, things slow down a little as Mark Toland transitions to "putting thoughts in" the minds of the audience. In this half, he recruits an audience member as an amateur mind reader and plays on the group's desire to keep the magic alive. In all of this, Toland reminds us, it's not magic, but demonstrates his philosophy that things don't need to be supernatural in order to be beautiful, mysterious, and delightful. He leaves with a reminder about happiness that would be cliche if he didn't clearly believe it so much, a testament to the way Toland's sincere charm creates a truly magical experience of the kind that can only be found in live theater.