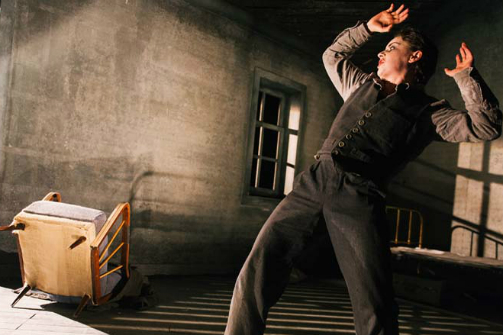 Maggie Bain in Man to Man. Photo by Polly Thomas.

It doesn’t look like much at first glance: a modest living room with a lone armchair and a small, cast iron framed bed in the shadows. A figure lies in silence and stillness on top of it, limbs sprawling out, stomach down; the bedspread seems thin and the walls seem to be closing in. Candlelight flickers. The figure wakes, struggles across the room and collapses into the chair, an androgynous presence with slicked-back hair and striking eyeliner, as if out of an old noir film. After taking a sip from her beer bottle, our heroine opens her mouth and we begin to learn about the life and miseries of one Ellen Gericke (Maggie Bain).

If you happened upon 59E59’s Angel & Echoes or Iphigenia in Splott earlier this year, and loved the intense and captivating storytelling in those productions, then Manfred Karge's one-woman drama would be right up your alley as well. The play follows Gericke‘s life in Weimar Germany and beyond. The bride of a forklift driver, she has just tasted the bliss of marital life when cancer takes her husband Max away. In order to survive, she puts on her dead husband’s uniform and keeps his job. And thus Ellen lives her life of deception and solitude, imprisoned by her loss of identity.

Bain has the necessary charisma and intensity to portray this tortured soul: it’s had to peel your eyes away from her. She elicits our sympathy as an innocent young bride, desperately clutching the little that remains from her memory of a perfect familial life: a paradise within a dingy apartment. But then her transformation into Max becomes equally gut-wrenching and fascinating. Ellen doesn't simply put on the persona of her husband, but becomes her own version of Max Gericke, a product of war and privation.

There are parts of the production that are too enigmatic to be captivating, but what's lacking in clarity is made up for by the performance and the design. Richard Kent‘s set and Rick Fisher‘s lighting create a magical and surreal environment that renders a shadowy cage, within which the heroine is entrapped. The sepia-toned atmosphere is a display of her haunted mind, intensified by the effective addition of cello music.

The horror of war, in this story, is not death or gore, but rather, the deprivation of self. Ellen's life is lost before she is able to thrive, and when it comes to the choice between survival and anything else, human instincts take charge. Ellen lives, but she also becomes the witness to such trauma that the 19-year-old “Snow White” is now but the lingering scent from a burned-up match.

(Man to Man played at BAM Fisher, 321 Ashland Place, through November 11, 2017. The running time was one hour 15 minutes with no intermission.  For more information visit bam.org.)

Man to Man is by Manfred Karge, translated by Alexandra Wood. Directed by Bruce Guthrie & Scott Graham. Set and Costume Design is by Richard Kent. Lighting Design is by Rick Fisher. Sound Design is by Mike Walker. Video Design is by Andrzej Goulding. Music Composition is by Matthew Scott. Produced by Pádraig Cusack.

The cast is Maggie Bain.