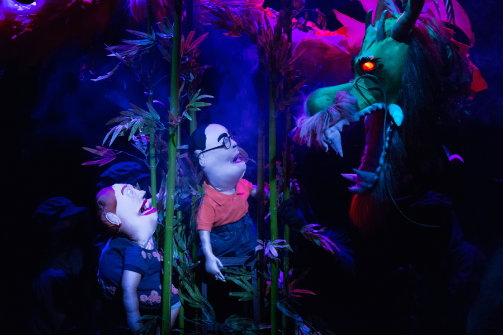 Peter Russo (as Mary) and Ariel Estrada (as Eddie) in Made In China. Photo by Heidi Bohnenkamp.

Introducing Mary Harrison (Peter Russo): a 56 year-old divorcee, naked, with a bowl of mac and cheese in hand, who shares the hollowness of her life with no one but her dog Lily. Exposed before the audience is her midlife crisis as she snacks on whipped cream and cleans up her breasts (both of which point south, but with slight variations). Her living room window faces the neighbor’s backyard, where we find Chinese expat Eddie Wang (Ariel Estrada): a fellow divorcee calling his daughter in a futile attempt to reconnect on the mid-autumn festival, also with a dog filling the void of a life currently without any particular theme. However, rather than making them fast friends, the pair's many similarities become catalysts to constant irritations and frequent squabbles.

After an impromptu spree at the supermarket, Mary discovers a note in a Christmas decoration package written by a Chinese labor camp worker pleading for help, a note which triggers a series of extraordinary occurrences in Mary’s otherwise mundane life. Household appliances, all of which are made in China, become animated and sing to Mary, showing her just how close she is to the problem at hand. And then, Mary and Eddie are sucked to China through Mary’s toilet.

Plunging into their adventure like Alice down the rabbit hole, Eddie and Mary soon witness the ultra-fast paced development of this upcoming superpower: every few seconds a new building gets erected; they confront the authorities, who are appalled by Mary’s mention of human rights; and they are thrown into jail without trial, and then later on into a labor camp, which was supposed to have been shut down. Everything they experience on the journey follows the description in the SOS note Mary had received. The hardship and terror ultimately bring Mary and Eddie closer than ever, and their differences dissolve into mutual respect, understanding, and love. As Mary and Eddie realize that they are both part of the problem, they are determined to take action together.

Made in China features over 30 puppets operated by an ensemble of 7 puppeteers, who masterfully create a darkly magical world. Each new scene is introduced with a segment of traditional Chinese percussion as well as chants that are typical in Beijing opera performances. The characters strike up exaggerated poses to define the switches between scenes—imagine the puppets “voguing” to traditional Chinese music. In the most hilarious, brilliant, and over the top way imaginable, the ensemble carries the characters through trials and tribulations that are simultaneously preposterous and painfully realistic. Made in China shows the dark underbelly of modern-day China’s blooming economy and somewhat impatient development, described by many historians and sociologists as the second "great leap forward." The show also explores the complacency of both China and the U.S., which contributes to and exacerbates the human rights issues.

Some of the musical's characters bring out the significant historical context of the ongoing issues: Eddie’s brother (Charles Pang), a ghost who haunts both of the protagonists and ultimately jolts them into action, was killed during the Tiananmen Square protest of 1989, a historical “detail” erased from Chinese texts books. (Growing up in China, I wasn’t aware of this event until I came to the United States.) And Ai Weiwei (Stephen J. Mark), an artist deemed dissident by the government-controlled Chinese media, is an appropriate choice for the protagonists’ guide through their journey.

The production strikes a thoughtful balance of entertainment and social responsibility, its style whimsical and unapologetic, its characters campy yet relatable. There is much to digest here, and the material will surely keep audiences pondering long after it’s over. People who had a blast at Avenue Q or Hand to God are in for a treat. As for people who are not yet familiar with the adult puppetry genre, they might just be pleasantly surprised, and inevitably charmed, by these sometimes raunchy puppets.

Certainly, there is some room for improvement when it comes to clarification and accuracies of specific historical facts, especially when the show is trying to tackle a multi-faceted, complex social problem like human rights in China, a subject of intrigue and deliberate obscurity over generations. But the company’s approach to this issue is direct, sincere, and passionate, yet also sympathetic, with a sense of humor. And that is indeed quite the formula for good theatre.