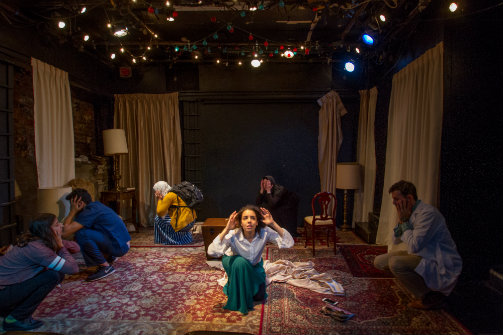 The full cast of Lost and Guided. Photo by Andrei Remenchuk.

BOTTOM LINE: Based on interviews with Syrian refugees, Lost and Guided offers a sympathetic depiction of those whose lives were torn apart by the Syrian war.

The Angle Project was founded in 2016 with a mission “to employ theatre to build, integrate, and strengthen communities that have lost their native environment and that now find themselves in a foreign social, cultural, political, and/or geographical context.” The majority of Angle Project's work is designed to support displaced people of various backgrounds, and many of its workshops and productions employ devised theatre principles. Lost and Guided, part of Angle's professional theatre branch, is based on writer/director Irene Kapustina’s interviews with Syrian refugees in the US.

Lost and Guided follows four young adults whose promising futures turn sour, due to riots breaking out in Syria. Imad (Doga Celik) gains a prestigious medical residency in New Orleans, but is unable to bring his fiancé, Amina (Mischa Ipp), leaving her to suffer the fallout alone. Amina’s friend Rima (Mouna R’Miki) longs to have her stories heard by the world as al-Assad’s army tears her family and her dreams apart. And Rima’s brother, Sami (Shayan Sobhian), must face the daily carnage in the local hospital while the violence rages on and secrecy hides the crimes. The scenes are loosely connected, but primarily present snapshots of how Syrians from all walks of life were affected by the civil war.

While Lost and Guided provides an evocative picture of how Syrians are living during wartime, it is not the sort of play that hammers home a clear thesis on the war or what should be done about it. In fact, at several points of the drama, it seems that all the characters are able to do is pray. Lost and Guided seems less concerned with driving action onstage than it is with catalyzing an emotional impact offstage: according to Kapustina, the play’s journey is “an attempt to alter the anti-human mainstream narrative of the refugee crisis by humanizing it through the depiction of concrete human lives.”

The design is fairly simple, and Wesley Cornwell (costumes, sets and lighting) and Adam Cuthbért (sound) work well together to transport us between Syria and the US, between wartime and prosperity, with minimal elements. It is also wonderful to see a strong cast of Middle Eastern performers, and all four leads in particular give endearing and compelling performances. That said, a great deal of the staging happens on or close to the floor, so sit close to the stage to fully experience their performances.

Every Thursday night during the run, the company presents post-show discussions featuring experts on the Syrian conflict. I attended the play on a Friday, so perhaps this conversation would provide the “conclusion” and actionable take-away I was craving by the end. I also acknowledge that Lost and Guided provides value beyond its artistic merit: it was beautiful to see so many hijabi women (several of whom did not appear to be frequent theatre-goers) in the audience, enjoying the play. Not only does the piece serve to humanize refugee stories in American discourse, but it also allows Arab communities to see themselves, their friends, and their neighbors reflected onstage. Kapustina may have initially intended for the play to elicit sympathy from non-Arab audiences, but the additional impact Lost and Guided can have on Arab-Americans is just as worthwhile. This is a space where their stories can be heard.

(Lost and Guided plays at UNDER St. Marks, 94 St. Marks Place, through August 27, 2017. Performances are Thursdays through Sundays at 7. The running time is one hour and 40 minutes without an intermission. Tickets are $20 in advance, $25 at the door and are available at lostandguided.com or by calling 800-901-7173. For more information visit theangleproject.wordpress.com.)