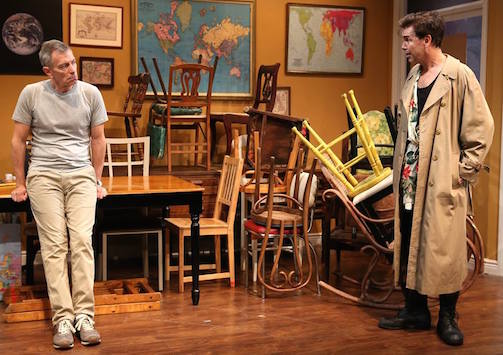 BOTTOM LINE: Arnie Burton and Matt McGrath shine as shaken friends trying to navigate the nightmare of the AIDS crisis in this gripping play.

In a small shop on "the oldest street in an American City," Jody (Arnie Burton) runs his passion project of a store: Jody's Maps. The expert scenic design by Anshuman Bhatia invites the audience into the cozy, narrow store resonant of the romantic storefronts still stumbled upon in Lower Manhattan. Jody, unbothered by customers, meticulously cares for the small shop, and hesitates to turn the sign to read as "open," but he seems content in his loneliness. Surrounded by pictures of the world, and large spreads of foreign countries, Jody cannot bring himself to set foot outside his own front door. His close friend and social antithesis Carl (Matt McGrath) continuously storms in with flourish, bringing the chaos of the outside world to Jody's isolated life among his maps.

Carl begins dropping off mismatched chairs, and sprints out the door with any number of excuses about needing to get to work—at the Met, or an auto glass shop. The happenings are just as chaotic as the time that they're living in. McGrath and Burton put forward incredible, subtle performances, bringing to life Steven Deitz's portrayal of two gay men, both equally lost, trying to navigate life during the AIDS pandemic. Jody hides among his maps, and Carl hides in his self-protective lies. Jody continuously asks when they can play "their favorite game: Telling the Truth," but neither man is fully ready to face their reality.

The performances and high standards set forth by Keen Company's production of Lonely Planet exemplify all that Off Broadway can offer. In an evening spent in the intimate Clurman Theatre, the company puts forward a challenge to think on, connect with, and truly hear the confusion of a tumultuous time. While other plays come forward to boldly politicize the chaos, Lonely Planet shows us the "Greenland Problem" of it all: which messes do we accept as a part of the world that we live in, and which distortions do we ignore, or else find the strength to face? When your friends are dying while you remain safe behind your walls (and maps), this is indeed the question.

(Lonely Planet plays at Theatre Row's Clurman Theatre, 410 West 42nd Street, through November 18, 2017. The running time is 1 hour 40 minutes with an intermission. Performances are Tuesdays, Wednesdays, and Thursdays at 7; Fridays at 8; Saturdays at 2 and 8; and Sundays at 3. Tickets are $65 ($80 premium) and are available at telecharge.com or by calling 212-239-6200. Tuesday evening shows are $20. For more information visit keencompany.org.)

The cast is Arnie Burton and Matt McGrath.