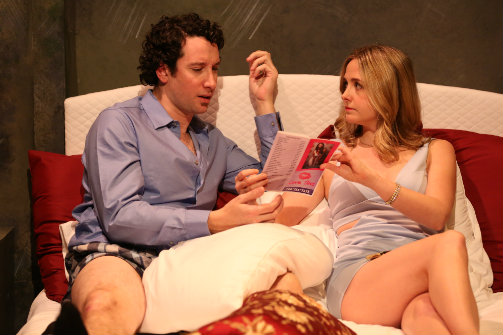 Michael Hogan and Clea Alsip in What Happens in Vegas. Photo by Carol Rosegg.

BOTTOM LINE: An evening of short one-acts with attractive synopses.

Four new works are being showcased at 59E59 Theaters, headlined by the world premiere of Neil LaBute’s latest play, What Happens in Vegas. It’s an evening of intimate stories, told with affection by a small ensemble playing multiple roles. Each play is entirely self-contained, but all of them seem to deal with love, and how people sometimes manipulate their close relationships to get what they want. Other than that, each piece has very little to do with the others, so it’s possible to enjoy one or two and be lukewarm about the rest.

In the first half, What Happens in Vegas gives us a snapshot of an evening of debauchery between a man and a prostitute in a certain city in Nevada. The man (Michael Hogan) is clearly out of his element here, but is comforted by his escort (Clea Alsip) who is totally not abusing his emotions to trick him into spending more money with her. The second play, Adam Seidel's American Outlaws, is about a guy named Mitch (Eric Dean White) who arranges a clandestine meeting with a local assassin (Justin Ivan Brown), but doesn’t prepare for the meeting half as well as the hitman does. It’s full of twists and reversals and keeps you wondering what will happen next.

After intermission Homebody, by Gabe McKinley, is the story of an unsuccessful novelist (Michael Hogan) living with his conniving mother (Donna Weinsting) during his unexpected rise and fall from grace with a publisher who shows interest in his book. The entire play takes place just between the two of them in their living room, highlighting their antagonistic relationship more than any other aspect of the story. Finally, in Cary Pepper's Mark My Worms, three artists (Clea Alsip, Eric Dean White, and Justin Ivan Brown) gather to mount a production of a classic surrealist play by a highly respected playwright who is now dead. Their problem arises when the estate demands they perform the text exactly as written—it's a problem because the play was originally written on a typewriter and is full of nonsensical typos. Together, they work through some of the text while the audience watches them struggle to reconcile their artistic integrity with their legal obligations.

Though the four plays tell entirely different stories, I found myself thinking similar thoughts as the curtain fell each time. While the premise for each sounds intriguing, the execution lacks a certain amount of substance. The characters and the circumstances are interesting, but that’s about the extent of the depth of these pieces. Each playwright succeeds in building a world that I wanted to invest in, but I didn’t find the events particularly compelling—when I could identify the event at all. In each play there is a lot of information and backstory that gets thrown around, but very little seems to actually happen between the beginning and the end.

The four plays in the LaBute New Theater Festival certainly contain characters and relationships that I would love to see put through the wringer in a more fleshed-out context, but as they are here, each play feels static. If you’re the type of audience member who likes to see what happens when you put two people in a room and observe their unfettered interactions, this little collection could well be entertaining, but unless you’re a big fan of Neil LaBute and his style of storytelling, the festival might leave you feeling unsatisfied.