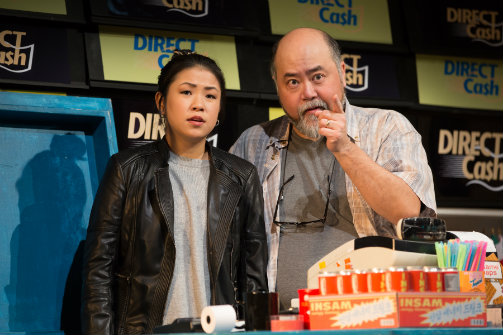 BOTTOM LINE: A feel-good comedy about the highs and lows of a loving family.

Familiarity is key in Kim’s Convenience. Those who live in cities know that the familiar convenience stores are the heartbeats of metropolitan communities. What could be described as Superior Donuts meets In the Heights meets your Friday night beer run, Ins Choi's Kim’s Convenience is one of the most endearing and sincere plays I’ve seen in a while. It’s a hearty family story, with a patriarch holding court over the community that he surveys, the daughter he’s less than proud of at face value, his kind wife who takes the lead in looking out for her children, and his absent son desperate to start again. With this play, the Canadian Soulpepper Theatre Company has tapped into an untold story that feels undeniably familiar. Meet your new favorite play.

Grounded in joy, Kim’s Convenience embraces the familiar in the form of hilarity. Choi has crafted a story particular to his upbringing that doesn’t require his audience to understand the Korean-North American or immigrant experience firsthand. Appa (Paul Sun-Hyung Lee) and his wife Umma (Jean Yoon), owners of a convenience store in Toronto, emigrated from North Korea before the Korean Civil War. Due to the war-torn nature of his homeland, Appa has a prejudice against the Japanese, and calls the cops on an illegally parked Honda, prompting his daughter, Janet (Rosie Simon), to reconnect with Alex (Ronnie Rowe Jr.), an old friend turned cop.

Appa and Umma mean “dad” and “mom” in Korean; Choi has granted us permission to see our own parents in Appa and Umma by naming his characters as parents first. Indeed, I recognize Appa’s suspicion in my Jewish mother, who is extremely distrusting of enthusiasts of the German car brand BMW, thinking, like Appa, that they are “guilty by association.” This is the beauty of Kim’s Convenience—you don’t need anything but a family for this play to resonate, for it relies on family dynamics to drive its dramatic conflict.

Kim’s Convenience lives in a world where appalling behavior is treated as jest. It’s revealed that Appa’s oldest child, Jung (playwright Choi), ran away from home when he was 16 after a fight with his father turned physical. Later, we see Appa use brute force to get his way with a man stealing from his store, and also with his daughter and Alex. Janet also uses brute force to get her way, returning the favor by literally twisting her father’s arm to make him say "I love you." Casual violence and prejudice is Appa’s standard behavior. The play provides a curious exploration of such a lifestyle of casual aggressiveness, but it fits in a world where the heightened sense of joy is exemplified, therefore exploring physicality as shtick not to take too seriously.

It’s not often a tight-knit family comedy works so wonderfully. Paul Sun-Hyung Lee, who has been with the piece since it’s humble beginnings as a Fringe show, plays Appa with a no-nonsense quick finesse; his performance is pure joy. Choi plays Jung with distant despondency. Jean Yoon's Umma is filled with sweetness, and Rosie Simon’s Janet is bright, but sorrowful where it matters. It does feel weird that 30-year-old Janet has such a power struggle with her father; some of their arguments feel contrived and forced within this humble world. One of the most fascinating casting choices is in having one actor play every "outsider": along with Alex the cop, Rowe plays each of the shop's customers—Black men from all walks of life. Choi thus allows for multi-cultural exploration within Appa’s store without ever manipulating his characters into making long-form declarations of self.

If Ken MacKenzie's set had a working cash register, it would be a functioning store—it is that detailed. Weyni Mengesha’s direction is flawless, allowing her cast to play with power through calculated volume and movement where it matters. She embraces what makes this play such a chestnut of the Soulpepper/Canadian community, and isn’t afraid of lifting up the self-effacing aspects of the world of Kim’s Convenience.

If all this discussion about uplifting stories hints at a play that errs on the side of sitcom, I have some news for you: Kim’s Convenience is now a sitcom on Canadian TV. Paul Sun-Hyung Lee and Jean Yoon reprise their roles as Appa and Umma, and this 13-episode series has been renewed for a second season, airing this fall. But while Kim’s Convenience is a joy to experience, its sentimentality (unlike many sitcoms) isn’t overbearing, maintaining that feel-good quality many plays fail to achieve.

Kim's Convenience is by Ins Choi. Directed by Weyni Mengesha. Set and Costume Design is by Ken MacKenzie. Lighting Design is by Lorenzo Savoini. Sound Design is by Thomas Ryder Payne. Stage Manager is Robert Harding.