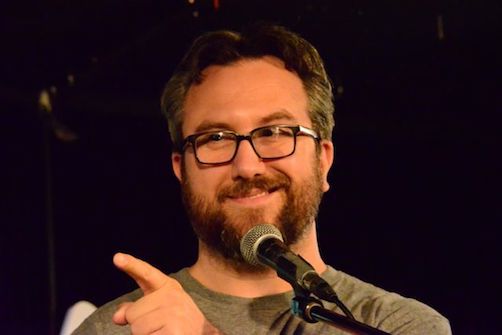 BOTTOM LINE: A master storyteller shares the tale closest to his heart.

Writer and performer Joe Charnitski hails from a humble upbringing in Pennsylvania and a long line of Joe Charnitskis. His father (another Joe Charnitski) believed that everything he ever wanted or needed was within a five mile radius of their hometown in Luzerne, PA. Although he shares his father's name, young Joe Charnitski doesn’t share his father’s small town sentiment and has his sights set on New York City. After being accepted to NYU to study film, Charnitski leaves with grand career intentions and vows to never live in Luzerne again. He finds love and success in the big city, but when his father is diagnosed with cancer, Charnitski returns to his home and must reconsider the direction of his life.

Charnitski is a skillful storyteller with an engaging sense of charm and ease. He thoughtfully conveys the rare, precious moments that can happen between a parent and child, like the first time he really sat down as an adult and asked his father about his life. Or the poignant times when parent-child roles are reversed and Charnitski assumes the role of caretaker to his ailing father. Still, his true gift is his ability to recall the emotional touchstones of his own journey and articulate them in such a way that it connects to memories of the listener. Although the play focuses on the eight years between the two eulogies he gives for his grandfather and father, Charnitski poetically eulogizes his own life in a way, through telling this story. He reveals his joys and sorrows, providing a warm-hearted preview of what someone might say on his behalf at the next funeral for a Joe Charnitski.

Charnitski is a Moth StorySlam winner and his story Haunted, Abandoned, Insane was featured on The Moth podcast this past fall. His stories treasure the meaning in small moments, anchored by a throughline of kindness and a reminder to accept life as it comes. Joe Charnitski’s Funeral was first developed this past summer with Standard Toykraft at The Tank and marks Charnitski’s first solo storytelling show—the first of many to be sure.