Written and Directed by Anisa George
Produced by George & Co. 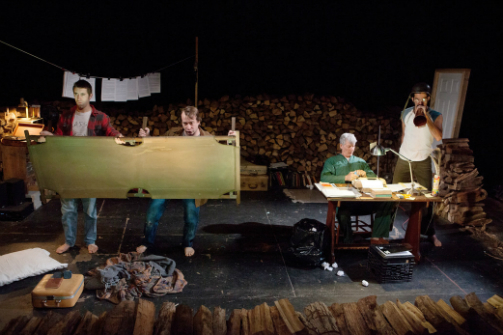 BOTTOM LINE: Whether you are familiar with The Catcher in the Rye or not, Anisa George's Holden is absurdly compelling writing-wise, performance-wise, design-wise, and idea-wise, no matter how you slice it.

It’s the original book of teen angst; the book whose cover graces tote bags, iPhone cases, and graphic t-shirts in urban hubs across the nation; the book that runs rampant through the doctrines of hipsterism: J.D. Salinger’s The Catcher in the Rye. We all know it (many of us know it quite well), but Anisa George’s Holden, titled after Salinger’s protagonist, is a refreshing and complicated take on the book, and it has a perspective infrequently discussed.

Even the most basic ways of describing the play’s basic premise are far from basic, so I will do the best I can to distill it. We open with four characters: Mark David Chapman (who assassinated John Lennon in 1980), John Hinckley, Jr. (who attempted to assassinate Ronald Reagan a few months later), some young angsty guy named Zev, and Salinger himself. They are confined in Salinger’s writing shack, beautifully designed by Nick Benacerraf to be equal parts war-time bunker, theatrical space, and cozy log cabin. Though it is a slow burn figuring out exactly how and why these characters have come to be trapped here with the author, one thing becomes apparent rather quickly: the only way they will ever be set free is if they can get Salinger to publish again.

Both Chapman (Jaime Maseda) and Hinckley (Scott R. Sheppard) carried copies of Catcher with them to the scenes of their crimes, and within the play both characters cite the book as the main catalyst for these crimes. However, they have infected the legacy of the book, and partially blame themselves for Salinger’s reluctance to write again. They all but worship this man, and to have disappointed or hurt your God is one of the biggest possible raisers of stakes. This confined, frantic, and desperate environment is reflected through the performers’ physicalities, especially that of Sheppard, whose Hinckley moves like a wild animal with no inhibitions or shame, and certainly no conception of the human desire to "keep it together."

The aspect of the writing for which I commend George the most—and there is an incredibly long list of commendable qualities—is her ability to create humanity in assassins, to show us depictions of real, sympathetic human beings while still holding them entirely responsible for their immense flaws. The same goes for Zev (Matteo Scammell), who doesn’t quite seem to fit into the picture. He has not shot anyone, is not a "real" person from history, and didn’t even really care for The Catcher in the Rye when he was forced to read it in high school. However, he does bear a striking resemblance to the person the original Holden Caulfield might be today, right down to his "Lassie" t-shirt which, when partially covered by the sides of his flannel, just says "ass," an ironic label in which he appears to take pride. We all know a person like this, a person whose wrongdoings others defend with, "That’s just the way he is," or, even worse, "That’s just the way things are." George throws this defense out the window, and through Zev she insidiously illustrates the violent reality of this personality type when heightened to its most dramatic—but still quite logical—conclusion. In a world in which many young people identify with and even idolize Holden, it is incredibly important to see a perspective like this, in which this character, and others like him, must be critiqued as individuals, just like everyone else.

This play does not exist in concrete space or time, nor does it deal in realism, and it is definitely for an audience that expects to have to work a bit. What is equally frustrating and exactly perfect about Holden is that it does not try to simplify or bluntly state its point; it knows it is dealing with complicated ideas, and it seems almost to take pleasure in complicating them even more. We have already seen the dangers of bastardizing an artist’s intent and consequently bastardizing reality, as George shows us with Chapman and Hinckley, but what does this mean today, 36 years later? What does this mean for the modern Holden Caulfield? And what does this say about the so often idolized original?