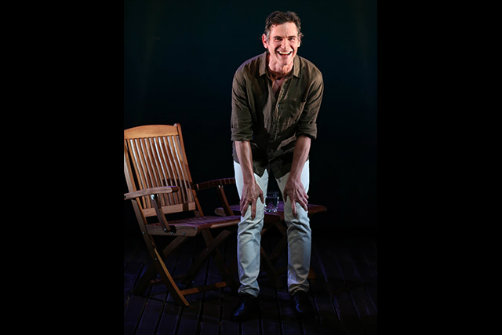 BOTTOM LINE: In David Cale's new solo show starring Billy Crudup, Harry Clarke is the one man you want in your life, and the one man you'll give up your own lot to be.

Philip Brugglestein is quirky, excluded, and from rural Indiana. Harry Clarke is unpredictable, charismatic and brings his cockney London charm to Manhattan. Through David Cale's new play Harry Clarke, we see how Brugglestein—portrayed by the sensational Billy Crudup—transforms into Harry Clarke, the man who can spin gold out of anything. Crudup fills out the character and the messiness of coping with a traumatic childhood. With an almost Patrick Bateman-level of intensity, Harry Clarke bursts in and makes a mess of everyone else's life, feeling little sympathy as a true sociopath would.

Right off the bat, we find out that Harry Clarke first reared his ugly head when Philip was only eight years old. As his parents argue and Mr. Brugglestein essentially torments his son, Harry Clarke becomes his protector. As he gets older, the London glamour of his cockney accent makes him the life of the party, and women are tripping over themselves to get to know this quippy, brilliant stranger. Of course, being Harry Clarke isn't a foolproof fix. At first, he confesses his true identity to a friend, and is immediately rejected. He swears to leave Harry behind, and he does—until he meets Mark Schmidt.

In Harry Clarke the story unfolds in sensitive, thrilling stories told by Crudup. His true self has no skills, no exciting investments, but as Harry he feels confident. Harry is well-liked, can seduce whomever he chooses, can catch boxer briefs with one hand without looking, and for once, finally seems happy. In this way, playwright Cale (who won an Obie for his 1998 solo show Lillian) proposes a complicated question: is rewriting our story such a crime when we don't have a say in which life we're born into? At a time when we can freely alter most things about ourselves, changing our dialect and given name to better fit who we feel we really are should make sense.

Aside from the subtle, sensual story, the set is left plain, so as to shift through the many bars, boats, and bedrooms that Harry encounters. Original music also written by Cale adds a refreshing element that helps distinguish Harry Clarke from many of Billy Crudup's other performances. Harry is confused but hardened. He is everyone's best friend, while no one knows the first thing about him. He is cosmopolitan and spinning out of control. Harry Clarke is the man you want in your life, and the man who will likely ruin it.

The cast is Billy Crudup.