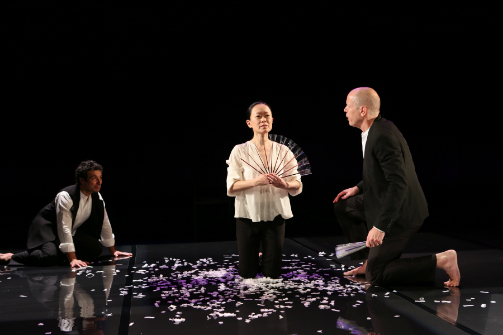 Hanjo is a reworking of a reworking of a reworking. From the Chinese writer Ban, of the Han Dynasty, comes the “Verse of Resentment.” Motokiyo Zeami reworks the poem into a Noh play; Yukio Mishima updates the work for a modern audience along with other text lying dormant in the vaults of classical Japanese Noh theater. There’s a further layer in an English translation here by director Leon Ingulsrud and staged elegantly by SITI Company in the immaculate Japan Society.

The necessity for English offers an opportunity: Akiko Aizawa as Hanako speaks only Japanese. The others (Gian-Murray Gianino and Stephen Duff Webber) speak English. Hanako is a woman described as “mad” who waits at the train station daily for a man she fell in love with at first sight. They exchanged fans and went their separate ways, and she has waited for him to return ever since. After a newspaper article is published about Hanako, the man returns; he speaks English. A woman who has been looking after Hanako confronts the man. We witness their meeting from one side of the conversation (presuming the audience does not speak Japanese—perhaps the wrong assumption at the Japan Society.)

But Ingulsrud has another plan up his sleeve: he switches the casting and now an English-speaking actor takes on the Hanako role. We get the other half of the conversation in all of its depressing and beautiful glory. It so happens that the man who has come for Hanako is not the man she been waiting for for all these years. In a kind of Cinderella story: the fan does not fit. The scene plays once more, for the third and final time, it is performed by the actors switching roles again, filling in additional dialogue with the English translation and maintaining the rich gestural language of Noh theater.

I wondered if indeed this was not the right man. I wondered also a more intriguing question: if the thing we are waiting for comes, how will we know? What if the thing we have been waiting for never comes? Or what if we do not understand this precious thing in the same context? Is it worth it to wait?

The work is beautiful. Perhaps it is right that a play about a long wait feels maddeningly tedious. By the third revolve, we really do get ahead of Hanjo in a way that doesn’t feel useful. For an audience to see the story three times, we beg for something different to be offered on the last go-round. A realization? A final goodbye? Hanjo leaves audiences waiting.

(Hanjo played at the Japan Society, 333 East 47th Street, through December 9, 2017. The running time was 90 minutes, no intermission. Performances were Thursday through Saturday at 7:30. Tickets were $35. For more information visit japansociety.org.)

The cast is Akiko Aizawa, Gian-Murray Gianino, and Stephen Duff Webber with Christian Frederickson on the violin.