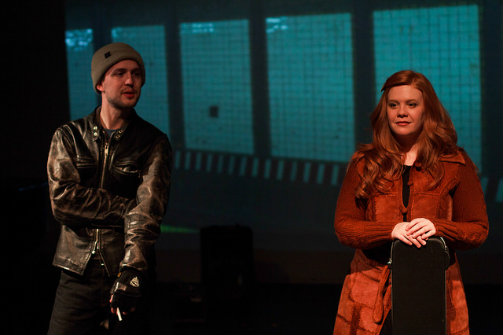 Long-distance relationships are tricky by nature, testing even the most committed partners’ emotional and logistic limits. Throw creative aspirations and immigration issues into the mix, and you’ve got drama worthy of a film, an album’s worth of songs, or, in Greencard Wedding’s case, a live show with all of the above. Featuring the original music of real-life collaborators Jody Christopherson and Ryan McCurdy, Greencard Wedding follows an Irish-American couple’s quest to sustain their love and art in the face of near-impossible circumstances.

Simultaneously told through live performance and pre-recorded video, Greencard Wedding follows the six-month relationship of Irish bartender/guitarist Connel Byrne (McCurdy) and American backup singer Joy Fine (Christopherson). Reconnecting on a Brooklyn subway platform after her band’s gig at the pub where he works, Joy and Connel’s impromptu jam session turns into a passionate—and all-too-brief—love affair. Forced apart by the cancellation of Connel’s visa, the two continue their partnership from afar, sharing songs and updates via Skype while devising ways for Connel to return to America. Shifting between live scenes, projected video calls, and musical interludes, Greencard Wedding chronicles the following months of Joy and Connel’s separation, depicting the hopes, desires, and frustrations that ensue. Comprising nearly half the show, Greencard Wedding’s video sequences capture every relatable nuance of modern long-distance communication, from the laughably awkward (technological snafus, time-zone issues, and a hilarious thwarted attempt at Skype sex) to the subtly tender (a capella serenades, late-night confessions). David Anzuelo has several standout moments as “Unka Dave,” the biker-esque host of a “Guitar For Absolute F---ing Beginners” YouTube tutorial that Connel sends Joy.

As time passes, Joy and Connel’s relationship is further strained by personal and professional jealousy, as well as the ongoing difficulties of relocation. The show lays bare the exceedingly convoluted process of securing an artist visa, as Joy and Connel struggle to obtain the necessary funds, recommendations, and paperwork. Meanwhile, Connel’s musical collaborations with his sister (Morgan Zipf-Meister) and Joy’s contract with an up-and-coming play threaten the pair’s exclusivity. With patience and trust wearing thin on both ends, Joy and Connel must question whether their artistic and romantic bonds can survive these obstacles.

Billed as a rock musical, Greencard Wedding’s live acoustic numbers infuse its plot with a remarkably concert-like feel. Christopherson and McCurdy are equally comfortable as scene partners and bandmates, inhabiting the songs’ emotional truth as much as their melodies. The resulting intimacy is palpable, and supplemented by such audience interactions as the passing of a “Honeymoon Fund” tip jar or the sharing of whiskey-soaked mini cupcakes. TheaterLab’s small space adds to the effect, but feels a touch incongruous; the show seems more at home in the bars and cabaret stages of its earlier versions than in this venue’s white box studio. Fortunately, Greencard Wedding’s upcoming tour and its stars’ ongoing life as an indie-rock duo will provide new opportunities for this versatile piece to thrive.

As its leads note, Greencard Wedding reads like “a massive Skype call,” offering a public window into one couple’s private journey. In doing so, it presents a measured, sincere portrait of contemporary love, and our efforts to bridge the physical and emotional distances which part us. The odds may not be in Joy and Connel’s favor, but still we’ll raise a glass to their happiness—and to our own.