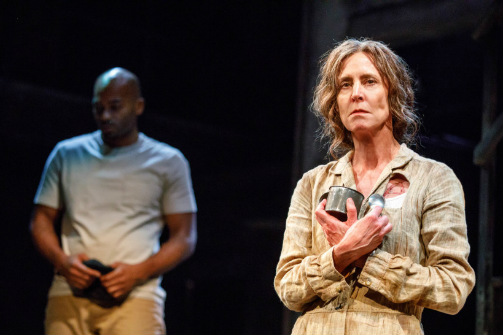 Brandon Victor Dixon and Christine Lahti in Fucking A. Photo by Joan Marcus.

BOTTOM LINE: This quasi-dystopian epic places a familiar hero onto a brutal but brilliantly conceived path.

Suzan-Lori Parks’s Fucking A plucks Nathaniel Hawthorne’s Hester out of colonial Massachusetts and places her in a fictional wasteland where the local abortionist wears the “A.” Hester (Christine Lahti) chooses the letter over suffering the same prison sentence that separated her from her son thirty years ago, and is now making steady payments for a chance to visit him. Scarred by mass incarceration, sexism, classism and total systemic injustice, Parks’s world bears the same marks as our own, and works Hester so far into the depths of despair that her only option is to take complete revenge. Employing the help of some allies, “kept woman” Canary Mary (Joaquina Kalukango) and the Butcher (Raphael Nash Thompson), Hester takes aim at the powers that be: the ego-maniacal Mayor (Marc Kudisch) and his hapless wife (Elizabeth Stanley), who Hester blames for her son’s imprisonment.

The story exists “anyplace, anytime, in a small town in a small country in the middle of nowhere.” Accents are mixed and mangled deliberately, women share their own special language called “Talk,” and all of the dialogue is loaded with abstraction; characters tell you exactly who they are, what they’re doing, why they’re doing it, and how they feel about it all. Sometimes they do it through song. Fucking A is no standard musical, yet it is somehow entirely musical. The language moves like poetry and the actors can slip seamlessly into song at any moment. The cast also plays all of the accompanying instruments, adhering the world’s many pieces together, and adding an impressive show of talent and theatricality.

The cast is phenomenal. Christine Lahti’s Hester is simultaneously stoic and terrifying. Joaquina Kalukango is thoroughly charming, and plays well off of Marc Kudisch’s Mayor, who is silly and evil and simply just fun to hate. Brandon Victor Dixon plays the devilish and mysterious convict, who charms the somehow endearing Elizabeth Stanley (who, I should mention, plays a startling array of instruments from the oboe to the tuba). J. Cameron Barnett, Ben Horner, and Ruibo Qian round out the cast, all performing in swing roles and carrying a lot of the accompaniment duties. Did I mention all of the actors play instruments?

This is not the feel good show of the year. It has startlingly funny moments, very charming songs, and well-meaning characters, but at the end of the day Fucking A exists in a wasteland. I mean, it’s a revenge plot executed by an outcast abortionist. For those who can stomach the brutalities (and I suggest you do), Fucking A is a thrill ride that shines a glaring light at our own world’s massive incongruities. Parks is a master storyteller who can communicate critical points without obfuscating her characters’ stakes, one who knows her principles well enough to make any story captivating. You can’t go wrong with Fucking A if you enjoy hard-hitting, thought-provoking theater, but if you're looking for something because Hello, Dolly! is sold out, this obviously isn't the best replacement.

Signature Theater is producing Fucking A alongside In The Blood, another Parks play inspired by The Scarlet Letter, as a series called The Red Letter Plays. It’s the first time Signature has produced two plays by the same author at the same time, and their hope is to create dialogue between the works and within the community. I haven’t yet seen In The Blood, but if it carries the same weight as Fucking A the pairing is sure to have people talking. The Red Letter Plays is an exciting event during Pulitzer Prize-winning Parks’s residency at Signature, and I highly recommend people, particularly those with more severe theatrical tastes, take advantage while both shows are running.

Fucking A is by Suzan-Lori Parks. Directed by Jo Bonney. Set Design is by Rachel Hauck. Lighting Design is by Jeff Croiter. Sound Design is by Darron L West. Music Direction is by Todd Almond. Stage Manager is Evangeline Rose Whitlock.