Fridge Fest Block C:
Funny Voices, or A Thing I Cannot Name and Two Below Zero

Off Off Broadway, Short Plays
Runs through 9.9.17
IRT Theater, 154 Christopher Street, 3B 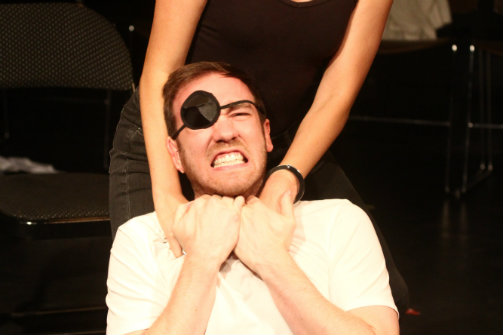 BOTTOM LINE: Fridge Fest's Block C is quirky, unpredictable, smart and occasionally funny, but too much intellect and not enough heart may leave you feeling hollow and wanting more.

It doesn't take long before Mathew Minnicino's provocative play, Funny Voices, or A Thing I Cannot Name, gets a rise out of the audience. Opening with a tense and taut verbal exchange as Lee (producer and actor Rachel Lin) berates Leo (John Racioppo) almost as soon as he walks in the door, one almost doesn't know what to think. Who are these people? Are they a couple? Roommates? Actors embroiled in a scene?

Eventually we discover these two exciting and excitable people are married, and trying different tactics, scenarios, and skits to recoup their "love" post-infidelity. Their "playbook," as it were, seems to be substantial as they call out high numbers and run through various choices. While it is unclear what precipitated the affair and what they were like before, it's evident that this resilient and creative couple has been through the ringer and are willing to keep torturing themselves until they make things right.

While Funny Voices is clever, occasionally funny, well-acted, and well-crafted by Kate Hopkins, the initial feeling of discomfort never goes away. Lin and Racioppo entertain as they slide from character to character, but the married people they portray are unlikable. No matter the part they're playing, there is overt hostility or simmering aggression; they're always at war with each other. And apart from the adultery, we know very little about them as people. Because Lee and Leo don't spend much time in their own shoes, it is difficult to latch on to anything emotional, meaningful, or substantive.

Funny Voices plays as deviant self-therapy where the subjects ultimately don't get better. It may be an intellectual and witty analysis of love, but the characters and the script itself never get to the heart. However, perhaps never quite connecting to the problems was Hopkins' intent. Surely some will identify with being in a hopeless relationship. Is Funny Voices a critique of the heroic attempts we make in order to save what is already doomed? Or is it a warning to end things before they get too ugly? Or is it an actor's dream? Whether an exercise in anger, loss, or futility, the cast and playwright work hard and smart, but may not produce the results that you seek.

While Funny Voices may leave you hungering for a connection, MJ Halberstadt's abstract and imaginative 35-minute excerpt from the hour-long Two Below Zero may leave you hungering for...food. Set in Marie Byrd Land, Antarctica, Two Below Zero is the tale of Cali (Lauren T. Mack), an amateur scientist who is content to live in an igloo that she made with her own hands. Conceptually original and interesting, Two Below Zero is not your garden-variety play, but it may be too absurd and incomplete, at least in this rendering, for its own good.

Of the two Block C plays, Two Below Zero has the best use of the refrigerator—as the entrance to the igloo. When Cali crawls out of the fridge in her puffy coat carrying a crochet needle and yarn, she sets a humorous tone that encapsulates the whole show. But before we find out more about Cali, her sister Zara (Allyson Condrath) barges in, drenched and freezing from her polar-bear-esque swim through frigid waters. Zara has literally come from the other side of the world to convince Cali to come back home, and she's not taking no for an answer. Determined and dogged, Zara takes great risks to retrieve her sister, but she isn't prepared (despite the drastic move to Antarctica) for Cali's staunch commitment to her new life.

Two Below Zero explores the complexities of a sibling relationship as each sister grapples with who the other has become. Yet their love and genuine affection for each other persists. But despite the quirky and endearing aspects of Two Below Zero, we want to know more about what drove Cali to seclusion, and what compelled Zara to come find her. Although this presentation touches upon both, these questions are probably answered in the fuller script. In some ways then, this excerpt skimps on the details.

What isn't skimped is the over-the-top nature of the piece. Condrath throws herself into the insanity of Zara, using her physical comedy skills to bring life to her character. Under Christian Amato's direction, Condrath dances, jerks, and twitches her face to get her point across as much as possible. Juxtaposed against Mack's more reserved approach, Condrath's choices keep us on our toes with alternating smiles and winces on our faces. The most successful moments are when the sisters must punch into the snow for the things they need. Whether it's food, plungers, or anything in between, the duo's commitment to their performance and the awesome sound effects of crunching snow take the audience on the ride.

Is Two Below Zero a critique of President Trump's position on climate change? Perhaps. The script certainly mentions this as a premise that may have snowballed into this show. However, what may have started as a political exploration picked up family drama, creativity, and zaniness along the way. The end result may feel unfinished, but there's enough mystery and mystique to make you want more.

Funny Voices, or A Thing I Cannot Name is by Matthew Minnicino. Directed by Kate Hopkins. Stage Manager is Yael Nachajon. The cast is Rachel Lin and John Racioppo.

Two Below Zero is by MJ Halberstadt. Directed by Christian Amato. The cast is Lauren T. Mack and Allyson Condrath.