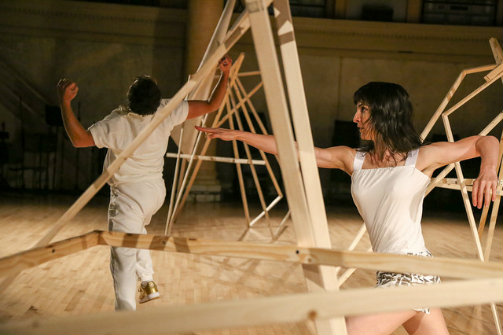 The quest to succeed houses the seeds of failure: while ideals may fuel our greatest endeavors, as imperfect beings we will always, on some level, fail to achieve them. The capitalistic society in which we operate widens this gap, its endless drive rendering our failures more acute and, paradoxically, more inevitable. Failure, choreographer Laura Peterson’s experimental dance piece, encompasses these truths, exploring the ways in which we traverse, fall from, and resume the bumpy path to greatness.

Amidst this steady pulse, Failure’s individual segments delve into the nuances of human folly and resilience. Dancers race against time or sprint victory laps, crumple and crawl in defeat, convulse in pain or shake it off to push harder. A couple’s smooth, ski-like tandem denigrates as tiring bodies, choppy breath, and loss of sync drive the pair apart. Fleeing from a spotlight, a woman becomes prey, her movements haunted and primordial as she fights to stay upright. Midway through the show, the company takes out its failures on the sculptures, smashing them in a cathartic display of frustration, anarchy, and loss. Yet the absence of these outward structures stops neither the motion nor the impetus behind it. Failure even finds individuality and pleasure within its grind, the company dancing off in good-natured competition or flailing in unfettered, gleeful imperfection.

By its latter moments, Failure morphs into a living commentary on the culture from which its themes derive. Its heightened, near constant activity becomes a de facto endurance test: we know that, grace and athleticism notwithstanding, its dancers will ultimately “fail” to maintain this level of effort. Nonetheless, we admire their attempts, eager to see just how far they can go. Effectively, we have become complicit in glorifying these unsustainable practices, and in upholding the failure-and-success culture that breeds them.

Like the bare-bones installations that frame its action, Failure’s simple execution sets the stage for deeper inquiry, guiding us to dissect our individual and collective approaches to failure. Its key message is one of critique, highlighting the inherent cruelty of our society’s impossible standards and brutal punishment of error. However, the piece acknowledges the continuum between healthy and unhealthy striving, not so much maligning ambition as warning against its excess. Effectively, Failure invites us as members of this culture to reassess the ways in which we personalize its narratives of failure and achievement, challenging us to take a more compassionate and measured approach. Perhaps, like its dancers, by accepting our failures or reshaping the stories around them, we may find empowerment and, ultimately, transcendence.

(Failure played at Judson Memorial Church, 55 Washington Square South, from June 29 through July 1, 2017. The running time was 80 minutes with no intermission. For more information visit lpchoreography.com.)