Created and Performed by Kimi Maeda
Produced by The Tank

Off Off Broadway, Solo Show/Multimedia
Runs through 3.12.17
The Paradise Factory, 64 East 4th Street 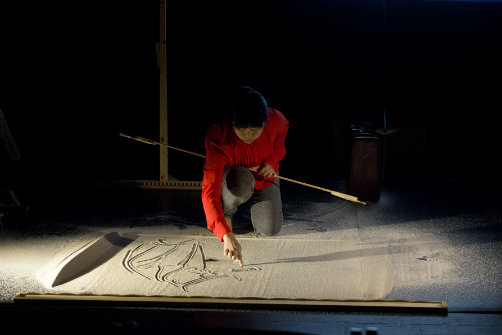 Kimi Maeda in the ephemera trilogy. Photo by Kirk Murphy.

BOTTOM LINE: the ephemera trilogy is a multi-media story of love, loss, and the victims of time, told through the elegance of paper, sand, and light.

the ephemera trilogy is not a story about lightheartedness or trickery. It documents artist Kimi Maeda’s personal lineage and the influence of both Japanese and American culture on her identity. Being a permanent resident of the blurry "in-between" zone, Maeda’s work in search of her roots is highly introspective. The materials she has chosen are the very essence of ephemera: a figure cut out of paper, a shadow traced on the wall, a flicker of light, a drawing in the sand.

The first part, "The Homecoming," is about Maeda’s own history. Four panels of paper cut with intricate designs map out the stories, which happen in four seasons. Maeda tells the story of losing oneself amidst a strange land and being unable to return home through fantastic tales about a woman who’s lost in the telephone lines, and a girl who traveled to a palace in the ocean and returned to find out that 300 years had past while she was away. Each tale is accompanied by a recording of Maeda’s narration and the artist’s performance of her paper cutouts. Her shadows of mythical creatures lingering on the wall is the most accurate way to show the indescribable, slightly melancholic journey she takes to trace back a memory over generations of forgetting. The style of the stories itself are reminiscent of Italo Calvino’s Cosmicomics: utterly bizarre and fantastical yet deeply rooted in raw emotion and true experience.

In the second part, Maeda traces the story of her mother’s sacrifice and perseverance, as well as her commendable independence, through "The Crane Wife," a quintessentially Japanese folktale in which a woodcutter saves a crane from a trap. In gratitude, the crane returns in human form to become the man’s wife, and brings him wealth by weaving the most beautiful fabric. Having promised not to watch his wife while she weaves, the man takes a peak, only to discover that his wife is really the crane he saved; the crane then leaves, promising never to return. The story is told through elegantly choreographed shadow puppetry that the audience follows, as if through a keyhole. For instance, their marriage is simply represented by two hands connecting, and the crane wife's weaving is simply a shift of the loop and the tug and pull of threads. The faceless characters in Maeda’s world of enchantment make it easy for Maeda to draw comparisons between the folklore and her mother’s life. It’s a marvel to witness Maeda's mastery in creating detailed narratives with something as simple and insignificant as a piece of paper.

The final part of the trilogy is "Bent," a documentary about the artist’s father who is slowly stripped of his identity and history because of dementia. Another comparison is drawn when the life of Maeda’s father, an art historian, is laid side by side with that of the NIssei (Japanese American) artist Isamu Noguchi. Maeda compares the two men's struggles of finding their identities while being the "other" in the environment they grew up in, as well as their experiences at the Japanese internment camp in Poston, Arizona. Photos and film clips juxtapose with Maeda’s sand drawing, which she creates and destroys before the audience; the fluidity and utter resistance of sand is of course an excellent medium to represent the final, and most gut-wrenching, segment of the artist’s family history.

the ephemera trilogy is a deeply personal and solitary piece. The narrations alone are written in a tone that is personable and poetic; it might have come out of an episode of This American Life. Coupled with materials that are of quintessentially ephemeral nature, the storytelling becomes exponentially intriguing. The personal history of Maeda’s family connects with the broader experience of Japanese Americans, demonized during and after World War II as "the enemy."  This "history lesson" not only sheds light on the inner workings of the artist’s heart and soul, but also has urgent relevance against the backdrop of today’s society, where the prejudice against Muslims leads to countless tragedies.

Witnessing all that the ephemera trilogy has to offer is a truly rewarding experience. There is layer upon layer of love in this performance of solitude and discipline. It’s a family album of one Japanese family, yet in the glimpses of light and cascading shadows, anyone might see the shapes of their own lost memories and think of home.

(the ephemera trilogy plays at the Paradise Factory, 64 East 4th Street, through March 12, 2017. Running time is 90 minutes with an intermission. Performances are Mondays at 8; Wednesdays through Saturdays at 8; and Sundays at 3. Tickets are $20 ($15 student, $30 reserved) and can be purchased at thetanknyc.org.)

the ephemera trilogy is created and performed by Kimi Maeda. Music by Kishi Bashi, The Blow, Bill Carson, Those Lavender Whales, and Rosa Conrad. Production Stage Manager is Anne Huston.