The Crusade of Connor Stephens

Written and Directed by Dewey Moss 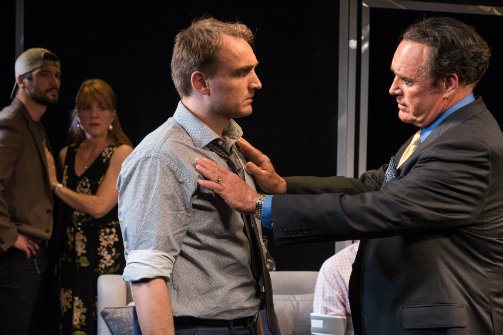 It’s the saddest story you can imagine—a teenager inspired by hateful rhetoric murders the young, happy daughter of a loving, same-sex couple in Texas. On the day of her funeral, families who have never met come together to pay respects at the girl’s fathers’ house, which is surrounded by protesters and reporters. The Crusade of Connor Stephens is already a tragedy made hyper-dramatic by the sad understanding of what hate in the name of religion can do. Even though the majority of the play’s circumstance is unpacked by the grieving characters after the fact, the tragedy turns into a melodrama through shouts and tears in between secrets revealed.

This living room drama is loud and intense—at intermission I had to move from the front row to an empty seat closer to the middle just to step back from the play’s palpable energy. Dewey Moss, Connor Stephens’ writer/director, wants you to feel the weight of this most unfortunate disaster. But because The Crusade of Connor Stephens is designed to be so entirely moving, it fails as a piece of construction—in between the histrionics, the play never lifts off the ground.

Tess, the six-year-old daughter of Jim Jr. (Ben Curtis) and his husband Kris (Alec Shaw), has been murdered by the teenage Connor Stephens (who we never see) out of hate for Junior’s and Kris’ same-sex relationship. When the families of the two men come together for the first time after Tess's funeral, things are very tense. While Kris’ sister Kimmy and her husband Bobby (Julie Campbell and Jacques Mitchell) are kind and supportive, Jim Jr.’s family is hateful and overbearing. At first there is only Jim's hateful mother Marianne (Katherine Leask) and his Grandma Vivi'n (Kathleen Huber), but later on in the first act, Jim Jr.'s father Big Jim (James Kiberd), the star pastor of a mega-church, makes a surprise appearance.

The boisterous and stubborn Big Jim commands a fearful respect; when he arrives, all eyes are on him, especially since Connor Stephens belonged to his church, and heard his many sermons condemning homosexuality as a sin. Big Jim is a shady figure, doing everything he can to distance himself from Connor’s crime while also maintaining the public image that earns him a fortune. He reminds one of another overbearing, tan, ugly gentleman in our current cultural-political consciousness. Uncomfortable in his gay son’s house, Big Jim believes Jim Jr. can return to the church, and spends much of the play trying to convince him to do so.

The Crusade of Connor Stephens unfolds as a series of secrets revealed one after another, so I won't give away too much of what happens after Big Jim arrives. It's enough to say that every character gets a moment when they are pushed into revealing family secrets or their true feelings. My favorite of these is when Kim—a demure and kind soul who loves her brother and brother-in-law unconditionally—finally confronts Big Jim. Stern and attacking, but with calculated distinction, she tells Big Jim that she prays that one day he will see how wrong he really is. But after a while of watching Jim Jr. and Kris try to piece their family back together on their own terms, it’s no longer entertaining.

The struggle over who’s right in this play will likely feel irrational to many, especially given the typical leaning of NYC audiences. Jim Jr. and Kris are clearly happier and better off without the hate of Jim Jr.’s family, so why does the play spend so much time with the hateful family members trying to convince "sinners" of the error of their ways? And for all of Big Jim’s manipulative and sinister behavior, there's a moment in a sermon he gives (which we see in a flashback) that is not unpacked. Clearly, the sermon is included so we can see how Connor Stephens twisted Big Jim’s words, but there’s no moment of reflection about such confusion. This is an example of how the text of The Crusade of Connor Stephens doesn't inform the performance; every actor has so much charged emotion that there's no room for subtlety.

The Crusade of Connor Stephens is fortunate to have great technical design. James Noone—who designed the recent Broadway productions of Sunset Boulevard and Lady Day at Emerson’s Bar and Grill—has created a beautiful living room set. Unfortunately, the staging of the play's climax (that was anything but climactic) is unkind to this living room form, with a few characters leaving the house to face the media over the course of a few door-slamming, histrionic moments. The lighting design by Zach Blane is exciting, taking us from the living room into Big Jim’s church with a startlingly bright transition. But while Teresa Snider-Stein's costumes are suitably somber, one wonders why more black isn't used, since most of the characters presumably came straight from a funeral.

It is interesting that the lobby display for The Crusade of Connor Stephens works to settle us into the world in a way that the play's text doesn't. I wish more Off Broadway companies and venues invested energy into lobby displays. Although Connor Stephens' displays aren’t particularly interactive, the famous (non-graphic) photographs of the aftermath of school shootings and of the egregious Westboro Baptist Church do much to set the tone. There is also a memorial set up with flowers, teddy bears, and cards. Although this is more a museum of cathartic imagery than a display of information, it works well for a play about the severance of a family.

I found myself wondering if the one-sided The Crusade of Connor Stephens lives well in New York City. Don’t get me wrong—I’m happy to watch close-minded religious fanatics realize how wrong they can be. Yet I would be interested to see how this play lands in a place like Big Jim’s Texas. Yet after the show, I noticed someone looking for a tissue (on the show's set, for some reason) to wipe his eyes. As much as I didn’t enjoy this particular play, I realize that The Crusade of Connor Stephens is not meant for me. Indeed, the memory of that man looking for a tissue on the set of a play about such grief will remain with me for a long time.

(The Crusade of Connor Stephens plays at The Theater Center, 210 West 50th Street, through September 30, 2017. The running time is 2 hours 15 minutes with an intermission. Performances are Mondays at 7:30; Tuesdays, Thursdays, Fridays and Saturdays at 8; and Sundays at 3 and 7:30. Tickets are $59 and are available at Ticketmaster.com or by calling 212-921-7862. For more information visit thecrusadeofconnorstephens.com.)

The Crusade of Connor Stephens is written and directed by Dewey Moss. Scenic Design is by James Noone. Lighting Design is by Zach Blane. Costume Design is by Teresa Snider-Stein. Sound Design is by David Lawson. Stage Manager is Jaime McWilliams.