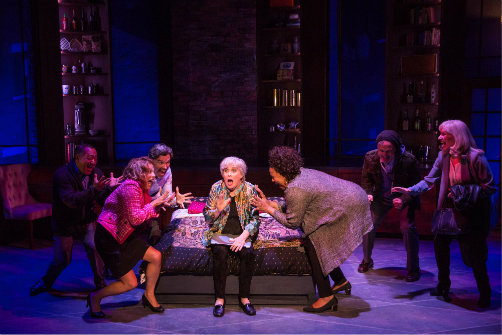 BOTTOM LINE: Bravo to Curvy Widow for showing that older women can be sexually active, but the material isn't deep enough to feel invested.

You don't often see the sexual desires of older women (or women in general for that matter) depicted on stage or screen. So it's refreshing that Curvy Widow is a musical that openly discusses the fact that a 55-year-old woman wants and enjoys sex. It also has the advantage of Nancy Opel in the lead role. Unfortunately, she can't make up for the often superficial writing.

Opel plays Bobby (the show is based on bookwriter Bobby Goldman's own life), recently widowed and ordered by her therapist to get laid. As she explores the world of online dating, scenes go from therapy sessions to dates to hanging out with friends without much in the way of transitions or character development. It's too bad, because Opel is such a gifted comedic actress and gets the most she can out of the material. The rest of the actors alternate the other one-dimensional roles, and try a little too hard to land the jokes. They aren't helped much by Peter Flynn's functional but uninspired direction. On the plus side, it's nice to see some diversity, especially considering it's a musical about a wealthy white woman with such a small cast. Not that this is the most diverse cast ever, but seeing as how some (much) larger shows can't manage to cast any people of color, it's a step in the right direction.

There are other steps in the right direction here. Rob Bissinger's set nicely transforms from an uptown apartment to a downtown loft. Some of Drew Brody's lyrics are risqué, and offer a glimpse of a subversive, entertaining musical buried beneath stale jokes. The show also gets at some important truths, like how male gynecologists don't often know what's best for women and how there are so many solutions for older men to still have sex, but not for women. Let's hope that Curvy Widow at least gives rise to more musicals about women owning their sexuality.

Curvy Widow is by Bobby Goldman with music and lyrics by Drew Brody. Directed by Peter Flynn. Choreography is by Marcos Santana. Set Design is by Rob Bissinger. Lighting Design is by Matthew Richards. Sound Design is by Ryan Rumery and M. Florian Stab. Orchestrations and arrangements are by Wayne Barker. Music Director is Andrew Sotomayor. Production Stage Manager is CJ LaRoche.