This show has closed. For more information, visit here.org 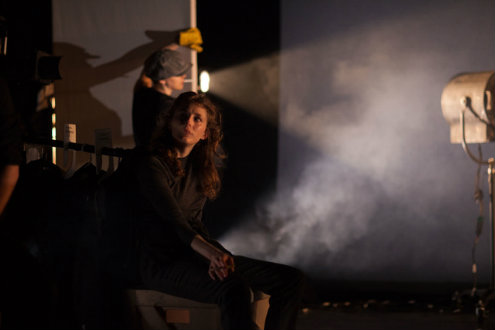 BOTTOM LINE: An enjoyable, funny, sincere, and tightly-managed chaos that brings the classic film Casablanca to life and captures the heart of a cinematic classic with a troubled backstory.

As the title suggests, Casablancabox imagines the studio lot of the 1942 film Casablanca, taking up the legend of the movie’s difficult production process and the tense context of World War II to imagine the delightful chaos that always comes with creating a work of art. The classic film acts as a backdrop and interlocutor for the play within a play behind the scenes. We move linearly through the film—the script was notoriously only half-finished when Casablanca began filming, and as a result it was shot in sequence unlike most movies—in which American expat and nightclub owner Rick Blaine finds himself in the center of the resistance during World War II and reunites with his former lover Ilsa. Casablancabox deconstructs Casablanca, stacking together the narratives of the cast, crew, and the movie itself, in a frenetic exploration of the creative process.

The play is many-layered, even beyond the play-within-a-play trope. Between moments of filming, actor conflicts and interpersonal drama abounds. It is difficult to claim any single narrative to the play, beyond the general promise of completing the film. Even this, though, is troubled, as the four screenwriters play off one another with excellent rapport, fighting to complete the script of the film which remains unfinished until the last possible moment. Interspersed with this struggle are a universe of subplots: Star Humphrey Bogart (Roger Casey) desperately tries to polish the fading star of his wife, aging burlesque performer Mayo Methot (Erin Treadway), as Ingrid Bergman (Catherine Gowl) presses on the rigid walls of her marriage while striving to be taken seriously professionally, and Peter Lorre (Rob Hille) finds his inner villain and wrestles with his addiction in an exquisitely choreographed shadow performance. Above and around it all is the frenetic and hilarious directorial presence of Michael Curtiz (Kevin R. Free, of Welcome to Night Vale), while messenger Irene (Stephanie Regina) barely keeps a lid on the chaos.

At the heart of both the film and the play is the tangled knot of World War II, which manifests in Casablancabox as a spectral tension, simultaneously distant and far too close for comfort. The tension boils over in a few moments, culminating in a gripping monologue by Polish refugee Adrianna (Annemarie Hagenaars) and the almost-comic relief of reluctant Austrian actor Gregory (Gabriel Diego Hernandez). But the war is a constant, complex presence, in a thousand small moments throughout the show as an unspoken, incomprehensible dread. The metaphorical parallel to the current political moment is clear and felt, if a bit heavy-handed at times (an otherwise throwaway line about “your complicated American heart” hits home), but it’s this kind of immense attention to detail that makes Casablancabox captivating.

The performers are tremendously well-rehearsed, and strike a solid balance between the historical and the imaginary of their characters. As Humphrey Bogart, Roger Casey riffs on the infamous figure and brings striking complexity to a character who can easily stray into parodic impression, and Catherine Gowl portrays Ingrid Bergman with a depth that captures the Hollywood starlet’s defiant self-determination. Casablancabox reclaims space for the absent, the ignored, and the whitewashed in Casablanca, and draws sharp attention to the strife and inequality that underscores the classic film. The show is an emotional and thematic rollercoaster, but its strong ensemble cast manages to walk the tightrope of organized chaos.

The show drips with complexity, from the elaborate choreography of moving screens to the deep-cut biographical details on every historical figure in Casablanca, and the piece’s three-year development certainly pays off. The technical precision of the show is the trick that brings the film to life. In fact, the film Casablanca itself is perhaps the real star of the show, appearing physically as a character to drive the point home. Cast members carry screens where clips of the film appear with remarkable precision, syncing up with the performance of the live actors and creating a bizarre augmented reality onstage. While the choreography is impressive and clearly enormously complex, some minor misses and imprecisions left me wishing for a bit more, to take the piece from clever performance trick to truly magical. But the tactic certainly works, and the film asserts its presence in physical space and provides a much-needed pillar of structure to the tangled web of stories. Technically, the production is perfectly minimal, with Laura Mroczkowski’s lighting design transforming the smoky space from dingy backlot to dramatic Casablanca runway with seamless ease.

While it isn’t vital to have seen Casablanca before seeing Casablancabox, the incredibly rich detail in the play is more impressive if you’re familiar—though my companion had a great time having only read the Wikipedia page for the film. Casablancabox is a fun and rich experience that packs a tremendous amount of complexity into ninety minutes and pays tribute to the chaos of art making in the best possible way—by living it.