By Jenny Lyn Bader, Jessie Bear, Erin B. Mee, and Colin Waitt; Directed by Erin B. Mee
Produced by This Is Not A Theatre Company 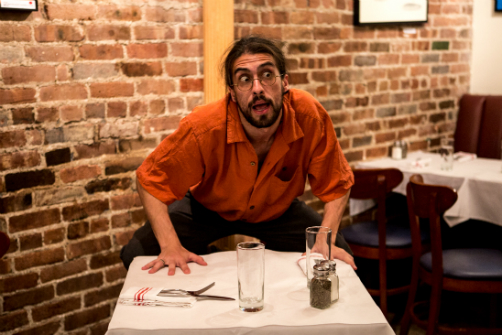 BOTTOM LINE: A new immersive show by This Is Not A Theatre Company eavesdrops on the conversations at a New York café.

This Is Not A Theatre Company has had their audiences soak their feet in a pool, ride the 7 train, and take the Staten Island ferry. The site of their new immersive show is somewhat more conventional—the Cornelia Street Café in the heart of Greenwich Village. Conceived and directed by Erin B. Mee, Café Play features the company’s signature eclectic writing, with scenes by Jenny Lyn Bader, Jessie Bear, Mee, and Colin Waitt. Add to the mix choreography by Jonathan Matthews, a dash of live singing, and sprinkle it all generously with the absurd, and you will get a recipe for a lovely theater outing.

Café Play has breakfast, afternoon tea, and late night performances; all come with a drink and a small snack. The grapefruit sorbet at the 3pm performance was divine, as was the crème brulee my friend ordered. Seated at the communal table for six, we chatted with other audience members about everybody’s experience waiting tables. It’s funny how the trivial can become common ground for strangers.

Looking at ordinary things from unexpected angles is what Café Play does best. In a series of vignettes we witness conversations among café patrons and staff: an awkward reunion of two exes, a scandal caused by social media obsession, and waiters who bond over their shared misery and fantasize about a zombie apocalypse. In other words, just a regular day in a New York café, albeit one where you can openly listen to the peculiar conversations at the next table and even hear what a cup and a cockroach have to say to the world.

Realistic scenes are followed by absurd monologues and rolling on the floor. Laughs alternate with poetic revelations. Serious issues like racism, ecology, and feminism are tackled along the way. The actors transform with swift costume changes in a fast-moving carousel of characters. Among my favorites: the Lonely Patron (Jonathan Matthews) and his “empowered woman eats alone” monologue is accompanied by dancing at, around, and on the table; the beautiful a capella song of waitress Laura (Jessica-Brittany Smith), who dreams about the Broadway stage; and the duo of Mary (Caiti Lattimer) and Ann (Amanda Thickpenny) obsessing over their bodies like broken records.

At times I found my thoughts drifting and my hand doodling with a crayon on the paper covering the linen. I also noticed my friend sketching, and my neighbor enthusiastically enjoying her desert. There is a rare beauty and lightness in the way that Café Play does not demand much of its audience. Yet at the same time, it’s rich in flavor, with a variety of textures. Like a box of chocolates, Café Play is sure to have at least one of your favorites.

Café Play is conceived and directed by Erin B. Mee with scenes by Jenny Lyn Bader, Jessie Bear, Erin B. Mee, and Colin Waitt. Choreography by Jonathan Matthews. Produced by This Is Not A Theatre Company.