The Cabaret At The End Of The World

Off Off Broadway, Musical
Runs through 3.19.17
IRT Theater, 154 Christopher Street 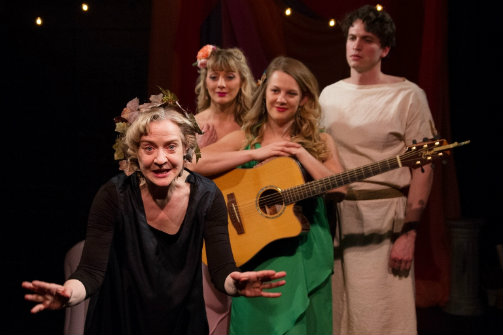 Rachel Benbow Murdy, Melody Bates, Samantha Bilinkas, and Connor Bond in The Cabaret At The End Of The World.
Photo by Jody Christopherson.

BOTTOM LINE: On the Ides of March, twin sisters Flora and Fauna are struggling to keep their audience entertained and safe as the world spins into a wicked turmoil.

In Melody Bates and Rebacca Hard's hilarious spinoff of Julius Caesar, the demise of the Roman emperor as well as the rest of that turbulent Ides of March unfolds outside of "The End of The World," an underground night club that twin sisters Flora (Bates) and Fauna (Samantha Bilinkas) inherited from their mother. With a lioness at the door and a mob storming the streets, the sister duo struggles to entertain their captive audience with song and dance and comedic acts galore. They keep getting sidetracked by the constant bad news updates from their ditzy servant Joshua (Connor Bond), including an announcement of the assassination of Julius Caesar, which Flora accompanies on violin with "Speak Softly, Love" (yes, that Sicilian song made famous by The Godfather).

It is easy to pick up the show's Cabaret influence from its satirical nature. Replacing the Emcee are the feisty hostesses: Flora is the over-the-top, slightly scatter-brained seductress, while Fauna is the more grounded and realistic of the pair. Bates and Bilinkas complement each other in perfect harmony, portraying the drastically different and sometimes rival twins. On staff at the club there's also Feronia (Rachel Benbow Murdy), a clown-like presence who mediates between the audience and the hostesses. Murdy portrays the ageless character with a natural whimsy and absolute sincerity that makes her a joy to watch. And finally, Bond is a nuanced performer who perfectly portrays an innocent and ernest Joshua.

As the show goes on, Flora and Fauna encounter a sleuth of unfortunate events that a modern American audience will relate to: an impromptu visit from Mark Anthony (J. Stephen Brantley) reveals that the popular senator is in fact a sexual predator; the club is potentially being bought by a rich politician and turned into luxurious villas. The show talks ancient Roman issues, yet indeed alludes to many of our contemporary societal problems. Although some of its comedic moments seem a bit forced, The Cabaret At The End Of The World is created with passion, and it's a great example of how satirical theatre can serve as a subversive force in an artistic community of resistance.

Speaking of resistance, the powerful duet "Resist" (with music and lyrics by Rebecca Hart), which the twins perform after defeating Anthony, is an empowering moment that will make your blood boil and your heart aflame, a true highlight of the show. The Cabaret At The End Of The World is a delightfully over-the-top
musical that can also hit the audience with gut punches that are all too real in our current political climate.

(The Cabaret At The End Of The World plays at IRT Theater, 154 Christopher Street, through March 19, 2017. The running time is one hour 30 minutes with an intermission. Remaining performances are Wednesday at 3, Thursday at 7, Saturday at 7, and Sundat at 3 and 7. Tickets are $25 and are available at brownpapertickets.com. For more information visit hardsparks.com.)

The Cabaret At The End Of The World is by Melody Bates; Music and Lyrics is by Rebecca Hart and Melody Bates; Directed by Joan Jubett. Choreography is by Hettie Harnhill. Music Director is Peter Szep. Lighting and Sound Design is by John Salutz. Costume Design is by Elizabeth Kurtzman. Stage Manager is Darielle Shangler.