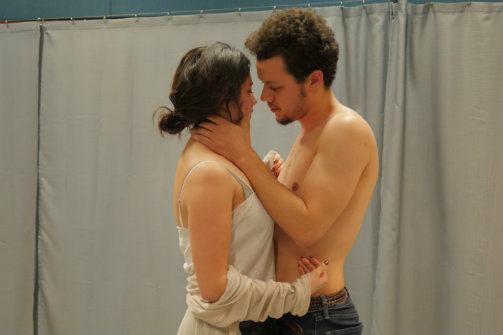 Kristi Stout and Tony Curtis in a rehearsal for A Crisis Called New York. Photo by Dan Fethke.

In an early February 2017 interview with ReviewFix.com, playwright Alisha Espinosa said that she wrote A Crisis Called New York to capture “the panic, identity-crisis, and chaos of living in New York as an emerging adult.” The play—a quirky pastiche of five unrelated sketches—focuses on late twenty-somethings who are attempting to navigate affairs of the heart and, as is always the case, the results are unpredictable and messy.

Some relationships veer into difficult conversations about intimate matters. Others involve ambivalent liaisons, where one partner is more smitten than the other. Still others include a hefty dose of fantasy and sometimes even delusions about the wiles and charms of an intended mate. "Gown & Glove," one of the skits in Crisis, is a case in point. The piece involves two people (Jordan Schroeder and Hannah Karpenko) who bump into one another more than a month after a chance encounter on a New York City street. The rendezvous is magical, the stuff of fairy-tales, even though both parties are actually in dire straits. It's the happy ending everyone hopes for. After all, who among us is so cold-hearted to dismiss a Missed Connections success story?

Throughout, questions of desire intersect with ideas about gender and sexuality, and, while this is not political theater, the eight-person ensemble ably navigate this well-traveled terrain. In "Wrest(ling)," for example, Dan (Michael Mena) confides to his friend Sam (Hannah Karpenko) that he recently met someone he likes. Turns out, however, that his comely date began life as a male and this has thrown Dan into a state bordering on panic. The ensuing discussion allows the pair to have an intense and honest discussion about what might unfold if Dan can let go of his preconceived biases and quell the terror it arouses.

It’s meaty stuff, and despite its brevity, the scene hits a resonant chord. Other vignettes, including "Perfect" (with Tony Curtis, Michael Mena, Kat Moreno, and Brent Shultz) and "Muse" (with Danielle Patlingrao and Jordan Schroeder), tackle the ways we project our insecurities onto others, a reality that colors what, and who, we allow in.

Espinosa is a deft writer and clearly has a good grasp on the psychological functioning of the age cohort she depicts. At the same time, the play never actually situates itself in the city it references, leaving the “crisis” of the title unrealized. It’s too bad, because in addition to romantic insecurities and foibles, figuring out how to pay the rent, utility, and food bills remains a challenge for all but the most well-heeled urban denizens. These struggles are also part of the transition to adulthood and A Crisis Called New York misses the mark by sidestepping them.

A Crisis Called New York is by Alisha Espinosa. Directed by Benjamin Abraham. Choreography is by Olivia Rubano. Lighting Design is by Anthony Tornambene. Sound Design is by Devyn Deguzman. Composer is Gabe Valle. Producers are Jazmyn Arroyo and Janelle Zapata.