Written and Performed by Mara Gannon; Directed by David Monteagudo
Produced by The New Collectives
Part of the 2017 FRIGID New York Festival 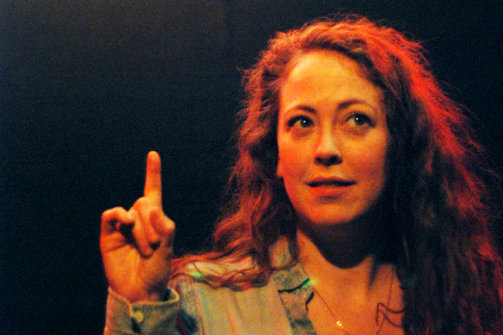 BOTTOM LINE: One woman’s hilarious and heartfelt trip across the country, recounting her past sexual partners.

Mara Gannon has gone on a road trip across the country. She did this alone. Gannon has also had over 60 sexual partners (or buyers, as she calls them in the list she keeps on her phone). And while other people were clearly involved, they didn’t help her feel less alone in this world either.

Buyer’s Remorse shifts between two modes of storytelling. In her direct address, Gannon shares with us the stories of select buyers past. Some of these stories are empowering and hysterical. Others are downright heart-wrenching. All are intensely relatable and serve as wonderful insights into Gannon’s outlook on love and connection. The second mode is a series of reenactments of Gannon’s road trip through several major cities across the US. She has panic attacks, visits bars, conquers mountains, and debates the validity of a solo experience in a social-media-fueled world.

These two modes are mostly tied together through their shared protagonist and themes, rather than a similar style or overlapping plot points. The direct address moments feel focused on the vulnerability that comes with sharing intimate personal details. In contrast, the road trip feels hokey at times, although each reenactment brings with it many laughs and a lot of charm.

Perhaps the most striking thing about Buyer’s Remorse is Gannon herself. If solo shows can feel awkward or stiff, Gannon not only holds her own, but her performance is simultaneously heartwarming and heartbreaking. Gannon has crafted her show in such a way that, aided by her clear skill, the audience almost has no choice but to fall in love with and root for her.

Buyer’s Remorse isn’t perfectly polished. Some of the cuts between segments feel jarring, almost none of the road trip moments hold a candle to what happens in the direct address bits, and the first five minutes of the show are somewhat forgettable and out of place. That said, it is nonetheless a gem of a show. If you are looking for a great girl’s night out treat, then be sure to catch Buyer’s Remorse before Frigid ends.

Buyer's Remorse is written and performed by Mara Gannon. Directed by David Monteagudo. Lighting Design is by Jeff Aldrich. Produced by The New Collectives.