By Mark Tjarks; Directed by Dennis Gleason
Part of the 8th Annual Dream Up Festival

Off Off Broadway, Musical
Runs through 9.9.17
Theater for the New City, 155 First Avenue 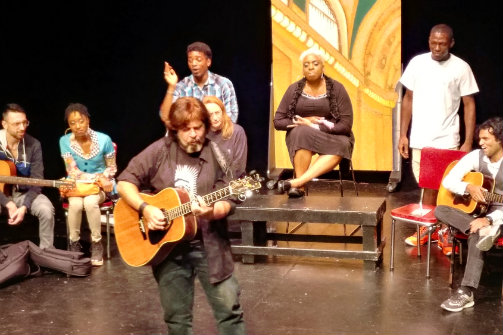 Ever wonder about the singers that you encounter at the 34th Street Subway station? How about the dancers in Times Square? Ponder why they do what they do? Then get ready for some of your questions to be answered in Mark Tjark's documentary-musical Buskers, the Musical. 9 buskers (street entertainers who perform for donations) with unique styles and stories come together at Grand Central Station for the MTA's annual Musicians Under New York (MUNY) program. While waiting to compete for a coveted spot, the performers gab about their journeys and demonstrate what they do. Though Buskers gives these real artists a platform to display their art, the documentary and musical genres don't marry well onstage. What the audience is left with is a talent show/biopic that doesn't quite come together as a theatrical piece.

But even if Buskers doesn't cohere so well, there are plenty of songsters and music to keep you glued to your seat. Azusa Sheshe Dance stands out as a gospel/blues powerhouse with a musical theatre twist. Hailing from Chattanooga, TN, her larger-than-life presence is rivaled only by her love for her late grandmother. Although she steals the stage whenever she walks upon it, her most memorable number is her rendition of Big Mama Thornton's "Hound Dog," a song made famous by Elvis.

Anil Salem delights us with amazing instrumentals. He not only plays the guitar and dulcimer masterfully, but he combines them in his own mesmerizing technique that he calls dulcitarring. Gabriel Aldort is a wonderful pianist reminiscent of Billy Joel. Juggling music and fatherhood, Aldort has weathered some hard knocks, but has matured both in his career and in life. Natalia "Saw Lady" Paruz is so joyful and amusing as she plays her saw that she becomes instantly infectious. Sounding like a lady cooing when it is strummed, her saw is distinctly whimsical and smile-inducing.

Singer-songwriter Sakinah Iman's "Waiting Tables and S#it!" is full of attitude and sass, and is her strongest performance amid an array of velvety contributions. Luke Ryan, while serving as the leader of this motley crew, cracks us up with his Southern twang and ditties like "The Waitress with the Chubby Thighs." Luke is also the one who suggests the collaboration between buskers that, in part, produces this musical. The partnership of sound—between these cast members and others like soul rapper Doctor Pure Silvermore and F Tones members Dwayne Beach and Marcin "Jack" Wisniewski—is the best element of this show.

Where Buskers leaves much to be desired is in the plot and the fleshing out of the concept. Although the musicians are skilled and their presentations are enjoyable, the lack of adequate structure, acting, and polish slows down the pace and dulls the theatrics. While the notion of learning about why each of these individuals became buskers is intriguing, the ultimate realization is uninspired. One after another, the cast shares, then performs, shares, then performs. Not only does this format lack ingenuity, it also reveals a weakness: when some of the musicians speak, it sounds like they're running lines.

Yet despite these flaws, Buskers the Musical unites voices that you wouldn't normally hear together for your audible pleasure. It also gives you a peek into the lives of people you wouldn't typically learn about as you're running off to work or jetting home. Cutting through the urban rat race, Buskers compels you to be still, stay for a while, relax, and groove.

(Buskers, the Musical plays at Theater for the New City, 155 First Avenue, through September 9, 2017. The running time is 2 hours with an intermission. Remaining performance is Saturday September 9 at 5. Tickets are $20 and are available at www.smarttix.com or by calling 212-868-4444. For more information visit dreamupfestival.org.)

Buskers, the Musical is by Mark Tjarks. Directed by Dennis Gleason. Choreography is by Dwayne Beach and Sakinah Iman. Set and Light Design and Construction is by Lytza Colon and Mark Marcante. Musical Direction is by Gabriel Aldort. Assistant Scenic Painting by Kanako Nagayama & Selear Duke-Williams. Stage Manager is Jayde Fuentes.