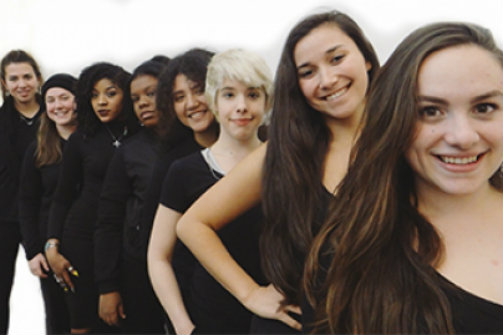 The cast of Blurred Lines.

BOTTOM LINE: In their newest show, Girl Be Heard gives a timely discussion of rape culture and sexual assault through a series of vignettes, sometimes dramatic and sometimes comedic.

When Robin Thicke’s song "Blurred Lines" first filled the air waves (and its accompanying video graced TV screens) it was quickly panned by feminists who found its lyrics, centering around a girl who says no but really means yes, to be contributing to rape culture and the growing problem of sexual assault. (Perhaps as a sign of justice in the world, Marvin Gaye’s family sued over the stolen melody and Thicke had to relinquish all profits he made off of the song.)  The theater collective Girl Be Heard references the song in the title of their new show, which addresses the problems of rape culture, sexual assault, and sexual harassment. As many members of the cast—all of whom also contributed to writing the show—are still in high school and college, the themes of the show have a particular immediacy to their daily lives. Blurred Lines is a series of vignettes centering around these issues, interweaving the cast members' personal experiences with fictionalized ones.

While these are uncomfortable topics sure to make some audience members squeamish, the show’s material includes plenty of comedy, including a game show devoted to questions regarding giving consent for sex. In another scene a teacher (played with comedic skill by Allison Flom) gives a pop quiz to her class and reveals surprising statistics about sexual assault in America. Another vignette shows a young girl (Jewel Phillips) walking down the street only to cower in fear as men cat call her from corners; she looks down in shame, worried about how what she wears might lead to frightening attention from men much older than her, illuminating the ways in which unwanted sexual attention from adult men creates connections between sexuality and danger, and forces girls to grow up too soon. To further change things up, performer Ray Johnson sings an original song related to the themes of the show.

In "Survivor Tango," the show’s strongest piece, the cast shares common situations related to sexual harassment and assault, some of which are based upon their own experiences. There is a nod to the current political climate as Flom describes her disappointment over a woman not winning the election and instead having a man who openly brags about committing sexual assault take office. Accompanying TV screens show a sea of pink pussy cat hats as protestors join the Women’s March following Trump’s inauguration. As the footage plays, Flom testifies to the importance of protesting in a world of rape culture where the reproductive health and rights of women are routinely being jeopardized.

Some scenes in Blurred Lines are stronger than others, but as a whole it sends a vital and powerful message about what it means to be a young woman in today’s world. Many of the performers show a great talent for comedy, taking on different roles as the show jumps from scene to scene. Each scene is also augmented by well-staged physical comedy. The moments of drama and intense emotion are also delivered and handled well. One might hear the phrases "teenage actors" and "rape" and expect over-the-top, after-school-special style acting, but the emotions are nuanced and the scenes, especially those with actors Me’Khai Lewis and Jesse Krebs, come off as accurate reflections of the real world; understated rather than overwrought and self-indulgent. The scenery, costuming, and lighting all serve to effectively augment the piece, making the many scene changes more streamlined.

Preteen and teen girls in particular should see this show to better understand the risks around them and the society in which they are living, whereas older women might see and be reminded of similar experiences they endured growing up. Girl Be Heard plans to perform the show at college campuses across the country, which will surely be beneficial as young women will learn to think more critically of their boundaries and sexuality while they are still developing a sense of self, and perhaps men (and women) who might violate others due to their own ignorance will learn the important concepts of boundaries and giving consent.  Overall, Blurred Lines is a powerful show that is especially relevant to those in their teens and early twenties, but raises important questions for everyone about what it means to grow up female (or not male) within a culture that encourages sexual assault.

(Blurred Lines plays at HERE Arts Center, 145 Sixth Avenue, through February 19, 2017. The running time is 75 minutes. Performances are Thursdays, Fridays, and Saturdays at 7; and Sundays at 2. Tickets are $10-$20 and are available at girlbeheard.org.)