This show is closed 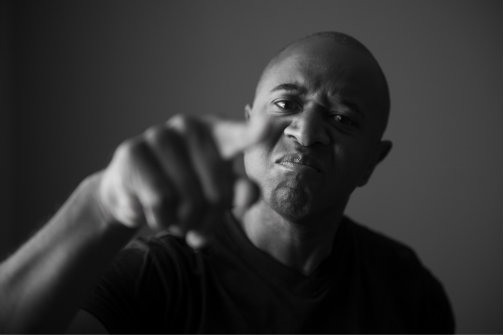 BOTTOM LINE: Different voices and perspectives from the Black community are explored in this thought-provoking one-man show.

In these Trumpian times, race is, now more than ever, a hot-button topic. As Michael Washington Brown explains succinctly, "Words matter." Words can lash, preach hate, and when set to music, words can soothe. Another character appears and asks the DJ to play his jam: Al Green’s "Let’s Stay Together." To him, "music is pure. It can’t hurt you; stupid people can." He questions why race relations have to be so complicated and divisive. He was happy calling himself Black, but his friends objected, telling him that they’d fought to be called African-American. He wonders what this designation means to Blacks in the rest of the world.

Brown gets laughs as the music lover talks about getting mail from his insurance company that now has a box to check off for African-American. He thinks maybe they won’t do a full pay out if he goes with that option. He puts the Black box back on the form with a note to the insurance company "so I’ll at least get half." He then seamlessly transforms into an Englishman, the son of West Indian parents who, unlike him, still have their accents. He asks, "How do I call myself Black if I don’t struggle? Being Black and struggle seem to be synonymous."

For a Jamaican father, family is imperative to keeping connected to one's culture. When his daughter sees photos of slaves, she asks if being Black is bad. Brown points out all the negative connotations associated with the word: blackmail, Black Death, black cloud, black heart—vs. white lies. "It’s a conspiracy to make us feel bad. We have to remind our kids that being black is a blessing, not a burden." He notes that in Jamaica, where 90% of the population is Black, there are also Chinese and Jewish people. But unlike in America, they don’t have Chinese-Jamaicans. "If we keep this division between us, it will kill us like a cancer." Fittingly, Bob Marley’s "One Love" plays.

Brown the actor is a skilled impersonator, inhabiting an array of characters and injecting them with warmth, intelligence, and humor. As a writer with only an hour and a lot to say, he eschews lecturing the audience and instead implores listeners to choose unity. It’s a reminder we can’t hear too much these days.

BLACK! is written and performed by Michael Washington Brown.