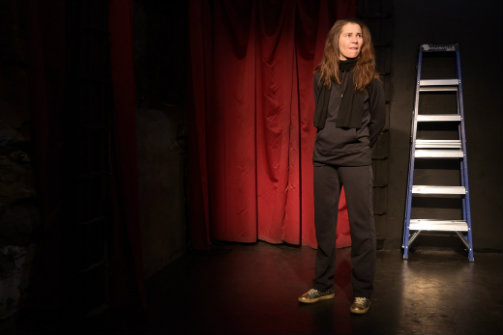 Nataša Warasch in Awkward But Graceful. Photo by Millie Schreibman.

BOTTOM LINE: A welcoming and comedic story about a European woman's journey to America in search of stardom.

Those of us who came to New York City from somewhere else have a story about how hard (or not hard, if you’re lucky) it was to get ourselves going here. If you can make it here you can make it anywhere, they say. In her solo show Awkward But Graceful, Nataša Warasch makes her way to New York to become an actress, inspired by her love of Golden Girls as a child. Warasch's journey to America is hysterical, scary, joyful, and moving. Warasch is a well-rounded storyteller who brings the audience into her world with audacity and sensitivity.

Warasch has an amazing sense of comedic timing and humor, no surprise given her background in stand-up comedy. She wears a hysterical Bavarian dress and her facial expressions are priceless and adorable. She uses her accent as a piece of humor itself, and throughout the piece she invites us into her world. Warasch describes her childhood living in Austria—by way of Slovenia—with vivid detail. Her impression of her father is very funny, and she is careful to include moments of doubt as well as confidence when speaking about her childhood.

The piece really kicks off with Warasch’s journey to America, first as a teenager on an exchange program. The U.S. is unlike anything she imagined from the movies, for she’s placed in a rural area in a neighborhood of predominantly mobile homes. She falls in love with a man with a mullet and experiences many firsts; after returning to Austria, she meets a woman who lives in Los Angeles; soon Warasch is back in the States, seeking her out. That’s the fantastical beauty of Warash’s storytelling: the Nataša-as-character is so innocently determined it’s entirely plausible she would follow a stranger halfway around the world. In Los Angeles the woman’s partner sexually abuses Warasch; her bravery in relating this experience is a huge asset to her storytelling.

Back in Austria, she gets into the Lee Strasberg Theater Institute, hoping to be "the female Al Pacino!" Just before she’s supposed to start classes, she learns the Institute doesn't provide housing. Yet she persists, and after a few more encounters with strangers, she manages to find something. Warasch is resilient, and it shows. Awkward but Graceful is one woman’s story of survival, but there’s something in it for everyone. The piece is a feat of courage and humor, and I loved every moment.