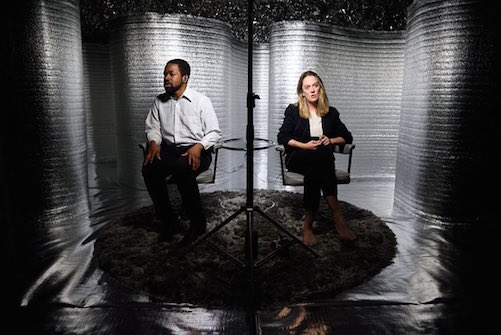 BOTTOM LINE: The quirky comedian Justin Kuriztkes breaks from his popular web-persona with his provocative, and aptly-titled, play Asshole.

In Asshole, Polly Lee and Ikechukwu Ufomadu take turns telling one graphic story. Each actor plays the same successful doctor who leaves his private practice after receiving an invitation to be a part of a prestigious medical opportunity—force-feeding prisoners on a hunger strike through a nasogastric tube. As the story continues, the doctor charts in deeper detail his lifelong obsession with his own anus, taking methodical delight in its scent and feel.

The doctor also tells us about one of the gaunt prisoners, who is increasingly infatuated with her feeding tube. While most prisoners have an excruciating time receiving the required nutrition, this woman craves more and more. She rejects solid food in favor of can after can of formula pumped through a bag. As the doctor abuses his asshole to the point of severe blood loss and the need for a surgical procedure to literally create it anew, the female prisoner gains hundreds of pounds as a result of her feeding tube obsession. Similar to the doctor's raw, bloodied skin borne of his fetishized obsession, the prisoner's own skin stretches to its maximum capacity, and her obsession with her nasogastric tube, similarly, leads to her own demise.

Asshole's author Justin Kuritzkes is not your typical playwright. Given that his play is about a prestigious government doctor whose infatuation with his own asshole and feces serves as his downfall, it might seem like Kuritzkes is a sober existentialist grappling for symbolism. However, this author of one of the most provocative scripts in recent memory is the very same man whose comedic YouTube channel has a loyal following. On social media, Kurizkes is a quirky joke machine, never missing a chance to twist and contort his face while picking fun at just about anything you can think of. He even has a comedic album, Songs About My Wife, with the popular track "All I Want is a F**king Bride."

All of this is to say that Asshole is not entirely sober or dark. There are many opportunities for laughter, both out of discomfort and out of true comedy. This leads to the question: should Asshole be taken as a metaphor for our own need to self-sabotage, or is Justin Kuritzkes just a master comedian, looking to plunge his audience into discomfort to see their reaction? Whatever the answer, thanks to Knud Adams' nimble direction, Asshole may leave you without an appetite for the rest of the evening, but is a sure-fire, thought-provoking piece.

(Asshole played at JACK, 505 1/2 Waverly Avenue, through September 15, 2017. The running time was 1 hour with no intermission. Performances were Thursdays, Fridays, and Saturdays at 8, with special performances on Wednesday, September 13 at 8 and Friday September 15 at 4. Tickets were $18. For more information visit jackny.org.)

Asshole is by Justin Kuritzkes. Directed and designed by Knud Adams.

The cast is Polly Lee and Ikechukwu Ufomadu.