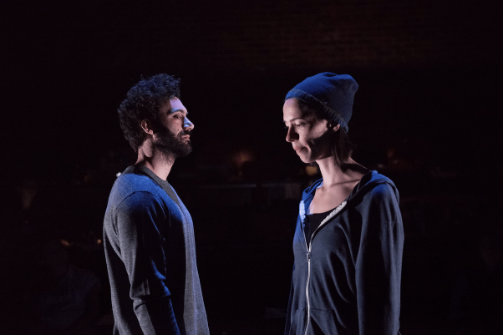 BOTTOM LINE: Toying with the line between perception and reality, Animal takes us on a viciously playful tour through one woman’s mental crisis.

Macbeth sees a knife floating before him, which he follows straight to Duncan. Rachel’s visions are not nearly so helpful.

Rachel (Rebecca Hall) has just entered a psychological crisis and is looking for a way out. Terrified, she begins alienating herself from her husband, Tom (Morgan Spector). She reluctantly enters psychotherapy with Stephen (Greg Keller), which seems to be doing more harm than good, especially once she begins having strange visions. Interspersed into the action are forays into Rachel’s inner self: memories of happier days, dark trains of thought, and ludicrous hallucinations.

Animal moves. Its action is thrilling. Its stakes, though deeply wrapped up in Rachel’s inner self, are made real in her relationships. It’s also funny. Playwright Clare Lizzimore has a sense for the ironies underlying mental health rehabilitation—the influence of pharmaceutical companies, the conflict between sense and self, the idea that because plenty of other people fall into similar crises, we’re meant to believe their experiences are pertinent to our own. Yet despite having a clear take on the whole issue, Lizzimore has the restraint to avoid the ideologies of clinical psychology. Instead of creating characters who embody different philosophies, she places her protagonist in the throes of depression and makes her deal. It’s messier than a simple debate on therapy, and much more fun to watch.

The acting is superb. Hall is both endearing and loathsome, somehow managing to be repellant (as depressed people often are) without ever killing the audience’s desire to see her get well. Morgan Spector and Greg Keller offer some much-needed groundedness to the funhouse-mirror world, filled out nicely by David Pegram (Dan), Kristin Griffith (Old Woman), and Fina Strazza (Little Girl).

Gaye Taylor Upchurch’s direction offers an intuitive map for us to navigate this tricky territory. Some theatrical devices are used to delineate the areas of Rachel’s mind: straightforward lighting for the current action; voiceovers for fleeting, disconnected conversations; spotlights for distant memories; and microphones for what appear to be her innermost thoughts. The mix of techniques engages the audience from scene to scene, allowing us to follow along while simultaneously keeping us on our toes. There’s nothing superfluous in the design elements, which cohere to create a unified, if arrhythmic, onstage vocabulary.

Virtues notwithstanding, Lizzimore’s play is not a foray into unknown territory. The mental health play has been around since Macbeth, if not before, and there are perhaps more contributors to the genre now than at any other time. Animal is not for those who are looking for a break from the soul-vs.-tortured-mind conflict structure. It is, however, the most refreshing attempt at it that I have seen. The play seems to waltz through a minefield of overwrought material—therapy sessions, questions of sanity, etc.—which is a testament to the specificity and originality that Lizzimore brings to her writing, and the simplicity the cast brings to their performances.

After hundreds of years, our minds can still seem to find themselves in some very dark corridors, and of course this always has and always will be the case. Yet with play after play, movie after movie, novel after novel on the subject, what does today’s theatre possibly have to contribute to such inherently internal drama? Something awe-inspiring, I think—at least if Clare Lizzimore has anything to say about it.