All The Fine Boys

Written and Directed By Erica Schmidt
Produced by The New Group 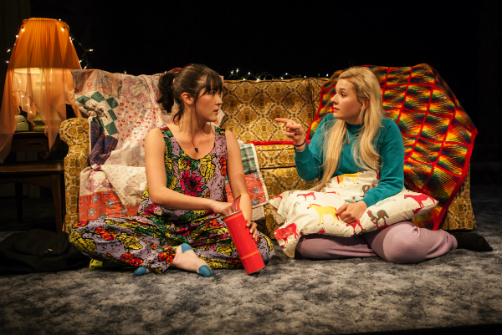 Isabelle Fuhrman and Abigail Breslin in All The Fine Boys. Photo by Monique Carboni.

BOTTOM LINE: A coming-of-age story takes a dark twist and shows the hunger and fragility of youth.

There's a specific kind of force about a teenage girl: her constant hunger is like that of a wildfire, coursing through the artery of her environment; her desire is deep as an abyss, her longing a magnetic field; her soul is fragile, yet she imagines herself with the strength of Atlas.

Playwright and director Erica Schmidt's latest work delves deep into the psyches of teenagers. Jenny (Abigail Breslin) and Emily (Isabelle Fuhrman) live in a small town in suburban South Carolina in the late 1980s. Both on the cusp of adulthood, the pair of best friends are embroiled in their sexual awakening. Soon, Jenny is involved with Joseph (Joe Tippett), a 29-year-old man and an acquaintance from her family's church. Emily, on the other hand, develops a crush on Adam (Alex Wolff), a high school senior.

The plot thickens as the parallel relationships evolve: Jenny and Joe's affair takes a dark turn as Jenny discovers Joe is married, and the latter feels increasingly worried that he's having a sexual relationship with a minor. Breslin and Tippett help make Jenny and Joe's on-stage sex scene the perfect image of disappointment, with Joe embarrassed because of his guilt, and Jenny embarrassed because of inexperience and curiosity, still eyeing a half-eaten piece of pizza. For Emily and Adam, young love also fails the test of time. Emily's devotion and Adam's aloofness eventually drive them apart.

Schmidt does a magnificent job portraying the awkwardness of teenagers' first sexual experiences. Over the course of 100 minutes, we witness both the metaphorical and literal death of youth and innocence. The flaws in All The Fine Boys might be in its carefully constructed clues: a major plot point is foreshadowed multiple times, making it difficult to be surprised. But the cast is a treat to watch, with Tippett and Breslin brewing up a storm while Furman and Wolff make a poetic match.

All The Fine Boys is written and directed by Erica Schmidt. Set Design is Amy Rubin. Costume Design is by Tom Broecker. Lighting Design is by Jeff Croiter. Sound Design is by Bart Fasbender. Movement is by Lorenzo Pisoni. Production Stage Manager is Jillian M. Oliver.