You Are Now The Owner Of This Suitcase 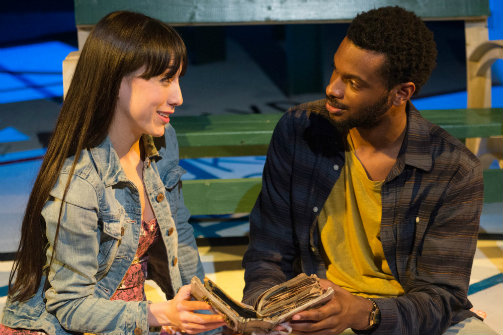 Mariana Cardenas and Kevis Hillocks in You Are Now The Owner Of This Suitcase. Photo by Joel Weber.

BOTTOM LINE: A fantastical adventure about interconnectivity that simultaneously delights and disappoints.

Just outside the entrance to the West End Theatre, a small space located on the second floor of the Church of St. Paul and St. Andrew, a map of the world hangs on the wall. It is specifically meant for the attendees of You Are Now The Owner Of This Suitcase, part of Theatre 167’s trilogy of Jackson Heights plays, who are asked if they would like to draw a dot either where they have come from or where their family originates. By the end of the show’s run, the map will be filled with dots of different colors, representing the different performances and the vast melting pot that both the city and the show’s audience encompass.

It’s in that spirit that Suitcase is born. The show is a fairy tale within a fairy tale within reality that takes place once upon a time in a very enchanted version of Jackson Heights, featuring 12 different characters of different backgrounds, stories and motivations. Just like the map on the wall, it connects a large city and a diverse community, where strangers straggle in from all walks of life. Whatever reality is your own, it is represented somewhere within the boundaries of New York and likely touched upon in some way in the show’s 80 minutes. Unfortunately, while full of heart and community, that is Suitcase’s most striking and complicated flaw. Like the city, it is stuffed to max capacity, allowing some of its facets to thrive to their full potential and leaving others to fall flat.

The plot’s pivot point is Laurita (Mariana Cardenas), a young woman who, arriving in New York from Ecuador to visit her grandmother, accidentally switches suitcases with Joe (Kevin Hillocks), her seatmate on the flight. When she realizes that her luggage, containing all her necessities including her grandmother’s phone number and address, has been taken by mistake, she begins a quest in Queens to find what she’s looking for. However, looking for a hint in her interim suitcase, she finds it only contains a note reading “You are now the owner of this suitcase.”

Interwoven through Laurita's journey are a cast of characters as strange and as magical as the ones in the fairy tale she carries along with her, the strange, the misunderstood, and the dreamers, some longing for love, some longing for more, and some longing for an escape: a barterer, a giant with his gold, an abused romantic, a prince and his sidekick, an old ugly witch who becomes young and beautiful, a child with a gift for storytelling, and a childless tailor.

Suitcase is a conundrum. A show that incorporates children’s fairy tales into real life lessons and a modern setting is undeniably exciting. To be just a train ride away from the destinations the characters seek not only makes the story more accessible and personal but also transforms the fairy tales you grew up with into something more tangible. If Little Red Riding Hood is off to see her grandmother not deep in woods housing a Big Bad Wolf, but instead in the heart of a neighborhood nearby, there is the potential for connection that is deeper than nostalgia. The stories are funny, diverse, and at times beautiful, blending life’s most hurtful realities together with its greatest adventures.

However at other times Suitcase somehow feels unbelievable, even beyond the unlimited boundaries of magic and fantasy. Whether that comes from the massive collaboration of seven writers trying to blend their individual voices into one cohesive idea, or the nature of a play that reworks the classic into the familiar with a modern twist, both the individual stories and the overall plot suffer from feeling disjointed and, unfortunately, unsatisfying. In this potentially great story about connectivity and togetherness, as all the many, many, many individual pieces of the puzzle come together, and it becomes clear everything leads towards a moment that not only brings every character together but connects every continent in the world, it’s hard to not be disappointed by how hastily thrown together that culmination feels.

Emerging from the multicultural spirit of the city, You Are Now The Owner Of This Suitcase ultimately makes the connection it is supposed to. New Yorkers and lovers of New York alike will feel in touch with its grittiness and honesty, and audience members of any age will be able to pick out the adapted storylines of their fantastical favorites. But for as much as You Are Now The Owner Of This Suitcase strives to reach everybody, it can only reach so far in its current incarnation. It is unpredictable and full of hope, but just because everything can happen in a fairy tale doesn’t mean it should.