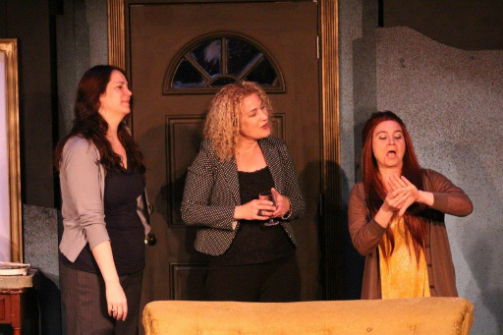 BOTTOM LINE: Though charming at times, Wine and Spirits’ oftentimes clunky dialogue and told-before plot holds it back.

It’s a family reunion with consequences, secrets and surprises in Thomas Ott’s Wine and Spirits, a new play directed by Mel Williams that opened at the Playroom Theater on June 2.

All is not as it seems as Felicia’s (played by Carolyn Seiff) three dissimilar daughters come to visit and help her pack up some of her old possessions. Selina (Carla Briscoe), a psychologist, Beth (Christine Seisler), a former party girl turned still quirky real estate agent, and Kate (Zoe Anastassiou), a struggling artist, have reunited to pack up their recently-deceased mother’s home, with a little help from a few bottles of wine to ease the conversation and chore ahead of them. Meanwhile, just on the other side of the room, Felicia, who is just realizing she’s passed on, is reunited in limbo with Gabrielle (Hailey Heisick), her one true friend who died young in a car accident, Gabby’s husband Henry (Ryan Salvato), and her own husband Redd (Scott Zimmerman). The sisters have learned a family secret, one that will shake them to their cores, and over the course of the day, both the living and dead will weave through a series of clues that take them through their pasts, presents, and futures.

Despite what you may be thinking, you haven’t seen this show before. The Ghost-like spirit-hovering-over-their-loved-ones device has been used on many occasions, in many incarnations. Unfortunately, like the many before it, here’s nothing particularly original about Ott’s script, not in concept or plot device or even dialogue. In this instance, it gets its power from the chemistry between the three sisters (or at the very least the lack of chemistry due to their differences), well-performed by Briscoe, Seisler, and Anastassiou as they have to weave not only their own combative relationships but also what seems to be a lingering complicated relationship with their late mother.

Unfortunately the conversations between the four spirits weren’t as spirited, clunky at best and unrealistic (unrealistic as a conversation between four dead people could be) at worst. One has to be a little ambivalent over, shocking revelations or not, how quickly and frequently the mood between Felicia and Gabby changes, going from lifelong best friend to “bitch” in what feels like a nanosecond. All that we’re left with is Henry and Redd, both particularly loathsome characters, unlikable in different ways and offering nothing but drama on the spirit side of the room.

Between three sisters and two ghosts, there are five women in cast of seven. Somehow, a show so heavily featuring women still feels incredibly male heavy-handed in its script. The sisters, though meant to be very different to further the first act’s revelation, still feel like archetypes, especially Beth, who is made of “plastic” and refers to others as “doll”, and Kate, who is a struggling artist whose dietary restrictions change as frequently as her hair color. They’re not fleshed out characters. They’re not meant to be. But oh, how I wish they were.

Not to say that means more dialogue, either. Some things are better left unsaid, and in the two hours, though very well paced and put together, especially in the first act, there isn’t enough silence. There are also sweet moments, though, that make up for it the messy bits: the sisters singing and dancing to a record of “Afternoon Delight,” followed by a requisite explanation of the song’s meaning to Kate, the many moments where Felicia is watching her daughters with love and awe and one moment in particular toward the end as Felicia and Gabby, both chipper and having made up after their short-lived, muddled fight, reminisce on one side of the room, while two of the women cry silently at the table on the other.

Albeit endearing and entertaining, I can’t shake the fact that it’s a show I’ve seen many times before in different incarnations and a storyline I can’t possibly see anymore. That said, it’s a proven formula. The audience was in stitches for the entire two hours and understandably so— Ott has taken a familiar plot device and created something undeniably charming, even with its many faults. But it’s hard to disappoint if you’re at least standing on strong foundation, even if the walls aren’t held up by much at all.

Wine and Spirits is written by Thomas Ott and directed by Mel Williams. Scenic Design is by Bailey McClure. Costume Design is by Sarah Beck. Lighting Design is by Susannah Baron. Sound Design is by Ian Wehrle. Production Stage Manager is Margo Murphy-Gross.