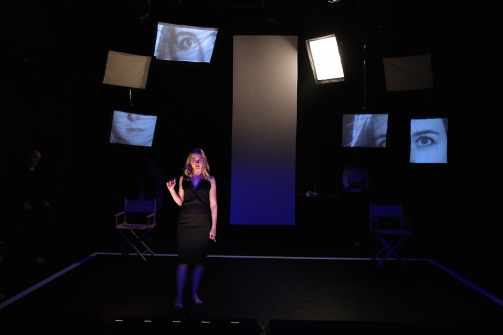 Wide Awake Hearts is one of the most cleverly written plays I’ve seen in a while, and surprisingly the writer’s focus on being clever turns out to be its one flaw. A (Ben Cole), a film producer, begins work on his new film, casting his best friend C (Tony Naumovski) and wife B (Clea Alsip) in the lead roles, roles which require them to enact a steamy romance.  The two excel in their roles and their acting becomes more and more convincing, causing A to begin to suspect that the two are having an affair. His paranoia worsens when his wife invites C to stay in their home instead of the motel production set him up with. A directly addresses the audience, presumably his investors and later, television networks to whom he is pitching stories, showing that he is slowly losing his mind due to the jealous rage boiling inside of him. However, confronting the two would prematurely end the filming, jeopardizing the project in which A has invested the entirety of his savings, so he suffers in silent misery with violent flareups hinting at his inner turmoil. The toll that the filming is taking on their marriage becomes further evident when A attempts to initiate sex with B and she balks, complaining that she has been doing that all day during the filming and she’s just tired of it.

One day the film editor D (Maren Bush) arrives at their doorstep and reveals herself to be C’s longterm on and off girlfriend. When asked how long she has been with C, D shrugs, saying perhaps it’s been forever and always. C and D begin trading verbal daggers, seeming more like sworn enemies than longterm lovers. D exchanges with B a jaded point of view on romantic love, insisting that love is merely the dopamine in the brain you experience during the first six months of a sexual relationship and that any feelings of love after that are just a memory of the dopamine rush.  But what happens, she wonders, when all you have is a memory of having a memory?

In lieu of traditional scenery, the set, designed by Konstantin Roth, is encircled with projection screens on which film footage of the actors are projected, reflecting the emotions of each scene, or the smoke rising from cigarettes or neglected food in the oven. Sound effects, designed by Elliot Davoren, also serve to compensate for the minimalist set, evoking different locations.

Playwright Brendan Gall’s script is chock full of all sorts of clever tricks and stratagems, and he eschews standard linear scenes in favor of showcasing fragmented moments that are not always placed together chronologically. Instead he gives a smattering of different scenes and monologues. Scenes bleed into one another: one second B is telling C about her painful panic attack and suddenly B is sitting on her therapist’s couch describing a bad dream. In another scene, what appears to be C’s confession to desiring B soon turns out to be in actuality an audition for a play. These shifts in scenes and tones make the play compelling, but also lessen the power and development of the characters, leaving the audience with a feeling of fragmentation and a lack of cohesion.

The script also includes some meta-dialogue in which the characters analyze the sort of lines they’re using. One exclaims “Stop talking in punchlines!” to which the other replies “Stop giving me setups!” There are also some wry winks at the theater industry, as when A discusses a movie idea, dissuading anyone from the prospect of it being a play by saying, “I’m not writing a play. Jesus, why don’t I just write a poem in Sanskrit?”  The lack of names for the characters, perhaps commenting on their interchangeability, adds to the feeling of fragmentation and underdevelopment. In the end the play is at its strongest when Gall tries not to be clever, but instead conveys with honesty the feelings of heartbreak and jealousy, emotions so inextricably linked to love and sexual connections that they can be hard to avoid or repress.

While so many plays present the darker side of sexuality and romance by focusing on graphic and titillating discussions and depictions of a myriad of sexual acts with the hopes of shocking audience members, Wide Awake Hearts focuses instead on the intense emotions created by jealousy and betrayal. After C’s admission that he is in love with B, D is forced to edit together the film and spend hours watching scenes that show the blossoming feelings between B and C. She replays an endless loop of C and B declaring their love for another through scripted lines that communicate their genuine hidden feelings. While this play would have been stronger with more scenes showcasing emotion and character development, it still is a strongly acted, stream-lined production that showcases honest moments of raw emotion laid bare by an immensely talented cast.