Watchamacallit: A Play About Jesus 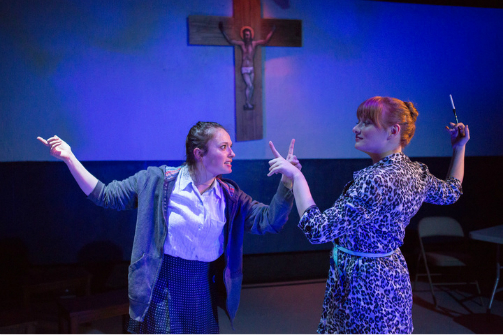 Miranda Poett and Claire Buckingham in Watchamacallit: A Play About Jesus.

BOTTOM LINE: The school mystic predicts the school skeptic will be the next Virgin Mary, beginning a farcical rabbit-hole of miracles that no one’s prepared for.

Considering how religion is such a touchy subject for most people, it’s easy to forget one can have a sense of humor about it. Emily Claire Schmitt’s Watchamacallit: A Play About Jesus isn’t so much self-deprecating as it is a self-reflection of things both astonishing and ridiculous about faith.

Set in a Catholic school, we meet Vanessa (Miranda Poett), a snarky teenager with an insatiable itch to leave home. Specifically, she fantasizes about studying physics at MIT, where professors will challenge her to think critically rather than blindly accept nonsense. She feels like an outsider in her own hometown—even her best friend Margie (Hannah Jane Ginsberg) doesn’t quite get her—and her feeling of isolation only worsens when her grandmother dies. While grappling with her personal woes, rival student and aspiring mystic Abigail (Elizabeth Scopel) predicts Vanessa will become pregnant with God’s child. Convinced Abigail’s just trying to get under her skin, Vanessa loses her cool and punches Abigail, landing herself in detention with Sister Florence (Regina Strayhorn), an old nun obsessively consumed with tending her carrot patch.

Over the course of this story Vanessa learns a great deal about herself, her loved ones and life’s miracles. Sister Florence helps her friend Trudy (Clair Buckingham), a feminist and activist with an all-consuming fear of conspiracies, smuggle condoms to Africa. Abigail’s prophesies may not fall too far from the truth—Vanessa’s never had sex yet she passes a pregnancy test. (Is this in fact God’s child? Or did something happen during her drunken stupor at “the party”?) And it turns out Vanessa’s grandmother and Florence were lovers in their youth.

Watchamacallit not only calls into question the absurdity of ancient traditions, but how an old faith can have modern applications. A closeted lesbian who smuggles condoms is by no means the typically ideal nun; later in the play Sister Florence empathizes with Vanessa when she wants an abortion, arguing that even God asked the Virgin Mary for permission first. Vanessa never asked for these miracles—she wanted religion to leave her alone entirely.

Ria T. DiLullo’s direction blends the play’s quirky relationship between the realistic and fantastical. The set’s main centerpiece is a cartoonish crucifix on the back wall. One of Abigail’s (many) strange habits is before she can deliver God’s message she must be both elevated and facing this crucifix no matter where she is on stage. A character who takes herself too seriously throwing herself at a crucifix devoid of seriousness makes for some hilariously smart moments.

The chemistry between Poett and Strayhorn perfectly portrays their characters’ odd yet sweet friendship. The scenes where Vanessa serves her detentions helping Florence in the garden are some of the most touching. One of the many stellar performances in this production is Buckingham’s as Trudy. At no point does her high-stakes energy waver, fitting for a character spilling with over dramatics. Schmitt’s humor already shines through the text, and Buckingham’s priceless reactions to every tiny detail puts the audience over the edge with laughter.

All of Schmitt’s characters offer multi-dimensional perspectives to the story, but Schmitt allows the questions she raises to only go so far. Watchamacallit navigates very serious questions and arguments which only last moments before being pushed aside or used for more laughs. I assume one of the play’s goals is to address the fact that many of the problems surrounding religion have no obvious solutions; Catholicism is abundant with contradictions that many followers struggle with. With that said, there is a fine line between a play that is open-ended and one that is indecisive. Vanessa’s pregnancy opens intense arguments about consent—consent to sex, consent to religious practice, consent to birthing a surprise baby Jesus—however, before Schmitt can dive into the full complexities of these issues the dialogue quickly turns to a joke or funny plot twist. There are fascinating kernels in Schmitt’s text, and I wish she’d wrestle with them a little more.

Otherwise, Waatchamacallit will induce laughter for any audience. Religion is a touchy subject, and Schmitt has found an approachable way to encourage people to laugh about their own relationships with faith.

(Whatchamacallit: A Play About Jesus played at The Secret Theatre at 4402 23rd Street, Long Island City, through May 8, 2016. Tickets were $10 and are available at brownpapertickets.com)