Off Off Broadway, Play
Runs through 6.26.16
The Sheen Center, 18 Bleecker Street 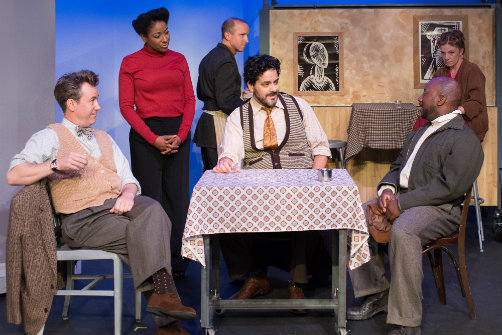 BOTTOM LINE: This skillfully portrayed tale is a compelling twist on classic sci-fi tropes and timeless questions about the nature of existence.

Universal Robots, written by Mac Rogers and directed by Jordana Williams, is a science-fiction/alternate history story about a universe where, in post-WWI Czechoslovakia, robots are almost indistinguishable from humans. It is inspired by R.U.R, a play written by Karel Čapek in the early 20th century that tells the familiar fable of humans who create robots who destroy humans. The play chronicles the events of the following three decades or so from the perspectives of a small group of friends who arrange federal funding for the robot project and earn various positions of power over their development.

The play does a great job of endearing you to these characters. As the friends grapple with the questions and challenges of creating perfect robots to serve human beings, we meet a strong-willed, jocular little club of artists, philosophers (which tend to overlap), and one scientist whose passionate rapport paints a clear portrait of their personalities and relationships. The roles are further enriched by a talented and diverse cast, all of whom take on their parts with great joy and devotion to the genres that the play pulls from. Especially impressive is their portrayal of the robots (all obviously played by human actors) as they become more lifelike over the course of the play—showcased with incredible specificity, mostly by Jason Howard who plays Radius. Hanna Cheek, who plays Jo, a sculptor, also notably takes her character on a deep and incredibly rich journey.

The set and costume design—by Sandy Yakin and Amanda J. Jenks, respectively—go a long way towards taking the audience back in time (and a little to the left into a parallel timeline). A few large constructs moved around and transformed into a number of different spaces, never failing to create the sensation that I was a fly on the wall in the tiny backroom where people make decisions that change the course of history. At the same time, the clothing is simultaneously influenced by major world players of the era and tropes that fans of sci-fi will appreciate.

The weight of every decision made by the protagonists is felt personally and globally as they start to lose control of their own creations. They are forced to confront their own systems of philosophy and morality as the line between human and machine becomes increasingly blurred. The friendships we come to know and love are splintered by conflict and tragedy, a (sometimes heartbreaking) testament to Rogers's careful work.

Overall, Universal Robots is a lovely, often comedic, and equally tragic take on a set of very recognizable circumstances. I truly felt connected to characters that I knew were not alive, until it reached the point where I wasn’t totally sure what it means to be alive. While fans of sci-fi are sure to get a special kick out of this play, I think anyone who enjoys intimate theatre that asks difficult-to-answer questions will surely get their money’s worth.

(Universal Robots plays at The Sheen Center, 18 Bleecker Street, through June 26th, 2016. Performances are Mondays at 8, Wednesdays through Saturdays at 8, and Sundays at 2. Tickets are $25 and $18 for students. For more info, or to buy tickets online, visit sheencenter.org.)

Universal Robots is written by Mac Rogers and directed by Jordana Williams. It is produced by Gideon Productions. Set design is by Sandy Yaklin. Lighting design is by Jennifer Linn Wilcox. Costume design is by Amana J. Jenks. Sound design is by Jeanne E. Travis. Props Design is by Monserrat Mendez. Fight Direction by Adam Swiderski.