To purchase tickets visit brownpapertickets.com or or call 718-392-0722

Written and Directed by Duncan Pflaster 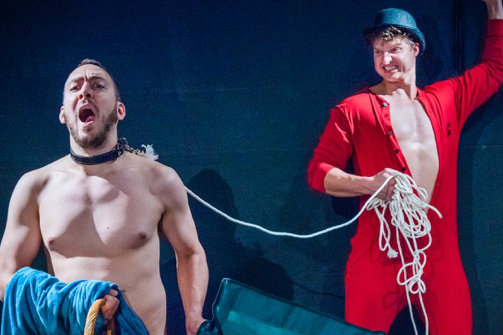 BOTTOM LINE: With its many insider references to putting up a production—and a Beckett production, at that—The Underpants Godot is an entertaining show for theater practitioners, Beckett-heads, and those familiar with the tribulations of rights and royalties.

Those familiar with Samuel Beckett know that even posthumously, the esteemed playwright is infamous for an overbearing hold on his plays: the Beckett Estate ensures that Beckett’s works are executed in accordance with his explicit, meticulous directions. Duncan Pflaster’s The Underpants Godot is a meta-theatrical exploration of how the Estate’s authority affects a small theater company producing Beckett’s Waiting for Godot. The company in Pflaster’s play is well aware of these constraints, but they seem to believe their company is too insignificant to fall under the Estate’s purview. Plus, they aren’t doing anything wrong. Or so they think.

Everything is running smoothly for director Doug (Patrick Walsh) and his cast of Waiting for Godot. The set—a rock and a shoddy paper tree—has been loaded in, the actors are off-book, and they are preparing for opening night. But when Beckett Estate representative Tara (Alyssa Simon) arrives unexpectedly at rehearsal, Doug’s artistic vision begins to crumble. As Tara combs through the script, requesting to see excerpts from Doug’s version of Godot, she takes issue with Doug’s deviations: the two main characters, Vladimir (Mark-Eugene Garcia) and Estragon (Roberto Alexander) spend the entire play in their underwear; Pozzo (Michael Andrew Daly) carries an iPhone instead of the scripted pocket watch; and Lucky (Jason Pintar) hauls a lawn chair in place of Pozzo’s stool. Armed with her worn-out, sticky-note-adorned Godot script, Tara scrutinizes the semantics. While she nearly capitulates to the prop and costume changes, Tara is less inclined to allow the deviation from Vladimir and Estragon’s traditionally platonic relationship. She struggles to green-light a production that depicts Vladimir and Estragon as lovers.

The Underpants Godot is a playful think-piece with a meta-theatrical structure that heightens the questions illuminated within the fiction. The audience is caught between Tara and Doug, both of whom offer compelling cases for defending the writer’s authority (Tara) and creative interpretation (Doug). The predicament is most obvious when we see that Doug’s choices, and his reasons for them, are legit. Doug’s version of the play champions Beckett’s text. Indeed, what little we watch of this erotic version of Godot does make the story pop in a new way. Leveraging this interpretation, The Underpants Godot hits on the socio-political ramifications of stringent stipulations, particularly when playwrights nix shows that stray from specified (or "implied") race, gender, or sexuality.

This play might not be every viewer’s cup of tea: while the themes—questions about authorial intent and the significance of updating dramatic classics—may be of interest to a general audience, its humor seems predominantly pointed towards theater practitioners and Beckett enthusiasts. What is perhaps more widely amusing is the visual imagery created in the play-within-a-play. Doug’s Godot conceit relies on degrees of nudity as a status symbol, and thus, the characters are costumed accordingly: Vladimir and Estragon wear tiny tighty-whities and bowler hats, Lucky is completely nude, and Pozzo dons the oddest costume of all—a bright red assless onesie.

While Pflaster’s script raises compelling questions, at many times, it feels a little preachy and verbose. The characters in The Underpants Godot spend a lot of time discussing issues rather than allowing us to engage with these questions through the action of the play. Then again, if this is a riff on Godot (a play in which there is a lot of talk and little action), perhaps these excessively chatty portions are deliberate. But of course—as Pflaster’s play drives home—authorial intent is impossibly evasive.

(The Underpants Godot plays at The Secret Theatre, 4402 23rd Street, through October 2, 2016. The running time is 90 minutes, with no intermission. Performances are Thursday through Sunday at 7:30. Tickets are $15 ($20 at the door) and are available at brownpapertickets.com or by calling 718-392-0722. For more information visit secrettheatre.com or underpantsgodot.com.)