Toscana, or What I Remember 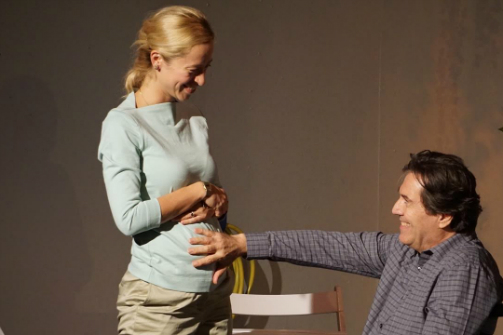 Nicole Contolefa and Scott Barton in Toscana, or What I Remember. Photo by Seth Perlman.

BOTTOM LINE: This new dark comedy is an interesting homage to the work of a writer lately-passed, yet one that packs its own punch.

Toscana, or What I Remember is the story of two couples in limbo, in Tuscany on more or less extended vacations. An introverted, twitchy botanist (Lance Olds) and his friendly, aggressively-pregnant wife (Nicole Contolefa) visit for a conference. A paraplegic (Scott Barton) and his Tuscan-native wife (Marta Mondelli, the playwright) prepare for a funeral. As the real reasons they’re in Italy begin to emerge, the couples profoundly influence each other, for a powerful conclusion.

The play is quite engaging, and often funny. Marta Mondelli’s dialogue always glimmers, and occasionally explodes, creating the shocked, delighted gasps one associates with Edward Albee’s work. Mondelli credits Albee as an influence on her style, and it’s clear that his signature themes of sadism, death, and sexual tension appear in Toscana. The seductive setting of the work is well-represented by Mariana Sanchez’s skillful design—all vines and café’ tables, artfully staged—and Andy Cohen’s delightful sound design. Overall, this is a well-formed production which does the Cherry Lane stage credit.

The audience also has the pleasure of seeing some outstanding acting. Scott Barton is stunning, as truly lovable wheelchair-bound Fred, static by choice. Nicole Contolefa is a delight, sharing pregnant Sue’s Midwestern solicitousness with the utmost sensitivity and strength. Lance Olds’s infuriating but dutiful Larry comes to life in a way that unpleasant nerds onstage seldom can.

Mondelli’s portrayal of Emma, however, falls prey to several classic blunders made by playwrights acting in their own work. She mugs slightly when she knows someone is dropping an important hint, belittling both the capacity of her audience and the strength of her writing. She also doesn’t listen to her fellow actors, reveling in the words rather than the human connections made onstage that fascinate an audience. (With the understanding that budget constraints are often a problem in downtown theatre productions, it would also be strongly advisable to take a second look at her wig.)

With his passing on September 16, this past weekend was a dreadful one for Edward Albee fans. Perhaps this play could provide a bit of a fix for those craving to honor his legacy onstage. It’s certainly a well-written piece, well-formed and mostly well-executed. Definitely worth seeing, it perhaps just falls short of Edward Albee’s greatest goal: for the “audience to run out of the theatre—but to come back and see the play again.”

(Toscana, or What I Remember plays at Cherry Lane Theatre Studio, 38 Commerce Street, through October 1, 2016. The running time is 1 hour 20 minutes with no intermission. Performances are Tuesdays through Fridays at 7; Saturdays at 7; and Sundays at 2. There is also a matinee on Saturday October 1 at 3. Tickets are $18, or $15 for students and seniors. Tickets are available at cherrylanetheatre.org. For more information visit toscanaorwhatiremember.com.)