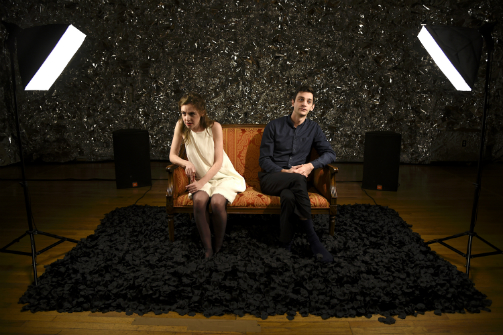 BOTTOM LINE: A tightly directed and acted absurdist comedy on the disappointing nature of life, relationships, books, and baths.

Eliza Bent and Daniel Kublick, stars of Celine Song’s Tom & Eliza, will leave you laughing and sighing over the absurdities of marriage and the dullness of suburban life. This surreal two-person comedy is set in a familiar—yet slightly displaced and a little fantastical—domesticated reality. Tom & Eliza is an hour packed full of examinations of life decisions and how we live with the choices that have been handed down to us. Fitting in well within the dynamic digs of the JACK theater space, Tom & Eliza feels simultaneously like a new-age romance and a tale as old as time.

“My parents fucked, I was born, now I’m here,” chant the titular heroes throughout the evening. Over the progression of months, years, and decades in Tom and Eliza’s marriage, this mantra gains overwhelming heft. While it could use a deeper final moment of closure, Tom & Eliza is a surreal snapshot of a quintessentially flawed relationship. Delicately directed by Knud Adams, all of Song’s bleak humor and rapid dialogue converges into an engrossing and intimate experience. Tom (Daniel Kublick) and Eliza (Eliza Bent) sit on a couch and talk; sometimes they speak to the audience, and sometimes they talk to each other, but they never skip a beat as they expose more and more of their of weird romance to us.

Bent and Kublick bring visceral chemistry to Song’s often abstract script. They genuinely crack each other up and weird each other out. Even after all the decades together, they still worry and yearn for one another. Kublick is a study in nuance. His performance feels as if he stepped out of the front row, sat down next to Bent, and just started talking to us. He is magnetic and eerily relatable. Eliza Bent, a popular fixture of the indie-theater scene, has an unfailingly graceful simplicity and pitch perfect timing. You can watch her do anything, or nothing at all, and she will manage to surprise and to alarm you.

Song first lures us in with the bait of a tale of average suburbanites—there’s quite a bit of rumination on the plights, discomforts and melancholies of the privileged, middle-class—and then she proceeds to systematically skewer all Rockwellian notions of perfection. Eliza, a librarian, absconds her duties and indulges instead in a morbid and questionably criminal literary hobby. “This is how you gut a book!” exclaims a euphoric Bent. Meanwhile, Tom, a writer of historical non-fiction, wallows and thinks about his parents— “my father’s hot sperm shoots like a rocket up my mother’s uterus”—as he soaks himself in grotesquely unhygienic baths. Song’s imagery is stark, uncomfortable, quizzical, and the duo of Kublick and Bent rattle off Song’s repetitive banter like first-rate hackers working through encrypted code.

Song nails a certain type of specifically suburban soul searching. The only real shortcoming of the script, regrettably, is that it is not very original. Abstract plays with ‘couples-who-talk-about-their-discontent-relationship-directly-to-the-audience’ are so popular that they’re essentially their own genre. Still, Song is after something uniquely her own as she tackles this popular format. Challenging the suburban expectation of everything always turning out all right, with—as Thom Yorke would put it—‘no alarms, and no surprises,’ Song asks: what do we accept into our lives, and what are we imparting onto the world? Whose version of our lives are we actually living?

(Tom & Eliza plays at JACK Theater, 505 Waverly Ave, Brooklyn, through February 27, 2016. The running time is one hour with no intermission. Performances are Thursday, Friday and Saturday at 8pm. Tickets are $18 and are available at jackny.org.)