Off Off Broadway, Play
Runs through 5.21.16
Sheen Center, 18 Bleecker Street 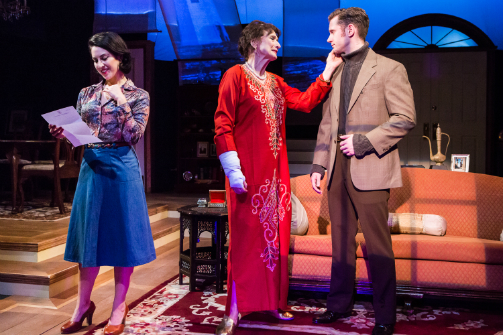 This Time is inspired by two Egyptian women’s stories: Amal Meguid’s life as represented in her memoir, Not So Long Ago, and the life of director Kareem Fahmy’s grandmother. An elderly Amal (charmingly played by Delphi Harrington) is staying with her recently divorced daughter Janine (played by a confident Salma Shaw) while recovering from a mysterious accident that resulted in Amal breaking her wrist. As Janine uncovers the truth of her mother’s past and her current condition, the play switches between the present in the 1990s and Amal’s younger days in the 1960s and '70s. Back in the '60s in Cairo, the younger Amal (played with class and sophistication by Rendah Heywood) was swept away by a young Canadian named Nick (played by Seth Moore with a distinctly Mad Men essence to him), despite being married with three children and feeling trapped in the middle of Nasser’s regime. Nick and Amal’s resulting affair had lasting consequences for them and both of their families, but it is up to the audience to determine whose version of the story we ought to trust.

Rising Circle Collective’s social media posts on This Time emphasize the lack of Middle Eastern representation on American stages, particularly in the post-9/11 era, and that trend definitely makes this play about an Egyptian family fresh and relevant. It is also exciting to see an off Broadway play that not only champions stories by and featuring artists of color (the core tenant of Rising Circle Collective’s mission), but also a play that centers on strong female characters. Playwright Sevan K. Greene ensures that Amal is far from helpless. In her youth she struggles against the social constraints against women in the '60s, and later in life she retains the verve of her younger years, as well as her love of the finer things in life. Her daughter, Janine, seems to have inherited her spunk, and commands the stage while managing her affairs with a cigarette confidently hanging from her lips.

The dual worlds coexisting onstage also provide fodder for interesting theatrical images. Greene’s shifts between younger and older Amal’s worlds invite director Kareem Fahmy to find moments for the two worlds to blend in his staging. Fahmy creates some lovely moments where older Amal relives being wrapped in Nick’s arms, and others where she chastises her younger self. Though the themes of the play get a bit muddled, Greene and Fahmy are most successful in crafting a sad, nostalgic love letter to youthful, whirlwind romances and a time when “men dressed to impress women, and ladies wore dresses.”

While the entire cast shines with the material they are given, the design of This Time is the star in this production. Sarafina Bush’s costumes are gorgeous, artfully curated for each character, and able to effortlessly orient us in each shifting time period. Scott Bolman’s lighting design is also instrumental as the play shifts between 1990s Toronto to 1960s Cairo to 1970s Rhode Island, and successfully distinguishes the multiple worlds overlapping in the lush and sophisticated home designed by David Esler. Mark Van Hare’s sound design crafts the subtle details and tone of the world, with slow and sophisticated French music in Amal’s younger days contrasting with Toronto’s cold winds in her later years.

This Time has a very limited run at the Sheen Center, but will open up wonderful new opportunities for underrepresented artists during its short time off Broadway.

(This Time plays at the Sheen Center, 18 Bleecker Street, through May 21, 2016. Performances are Tuesdays through Fridays at 8, Saturdays at 2 and 8, and Sundays at 7. The play runs 2 hours with an intermission. Tickets are $18 and are available at sheencenter.org or risingcircle.org. For more information visit risingcircle.org.)