Created and Directed by Jonathan Rockefeller 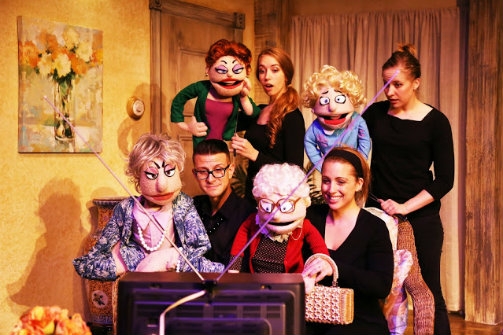 BOTTOM LINE: The Golden Girls done Avenue Q-style, That Golden Girls Show! is a parody that’s faithful to the original, which may be part of the problem.

That Golden Girls Show! may be the only show running right now that begins with an audience sing-along; as the lights go down and a karaoke version of “Thank you for being a friend” starts to play, the audience tentatively, then eagerly, joins in. It’s clear what we’re all here for—the joy of revisiting a favorite sitcom, with four characters who never fail to make us laugh. But unlike other Golden Girls parodies I’ve seen, where the “girls” are played by men in drag, That Golden Girls Show! serves up biological women (well, mostly). The difference here—these women have puppets.

To a certain extent, superfans of The Golden Girls will not be disappointed here. Sure, some of us might spend the pre-show spotting a few minor differences in David Goldstein’s largely faithful set (“the phone should be yellow, not white. And where are the copper cake molds?”) But the minute the girls walk on stage—well, black-clad actors with puppet versions of the girls—we’re on familiar ground.

Best of the four is Michael LaMasa (replacing Weston Chandler Long) as Dorothy. Given Bea Arthur’s wry, low-voiced persona, it makes sense to cast a man in this role, and LaMasa does not disappoint. Sure, it doesn’t hurt that his puppet (by Joel Gennari) has the perfect Dorothy glare, but LaMasa’s delivery of Dorothy’s put-downs is consistently spot-on. Also great is Cat Greenfield as Blanche. If Greenfield, like everyone else in the cast, is significantly younger than her television counterparts, her ability to expertly mimic Rue McClanahan’s vocal cadence shows why playing Blanche requires far more than a Southern accent and a “perky bosom.” Emmanuelle Zeesman plays Sophia; although her vocal performance is just in the ballpark, she nails Estelle Getty’s iconic walk. And as nitwit Rose, who here is caught up with starting a herring circus, Arlee Chadwick is fine, if less striking than the others. Last is Zach Kononov as Stan (and later, a UPS delivery man), the one non-puppet character. While Kononov does well as the fifth wheel, Rockefeller’s script gives Stan much more stage time than is perhaps needed, or wanted.

As with any good parody, conceiver/director Jonathan Rockefeller pokes fun at the original with some meta-jokes, like those about the artificial nature of the set. He’s also worked in references to specific episodes, like a line about “Coco, who just didn’t work out,” and a certain playboy sculptor who slept his way through the house. For those who don’t know each and every episode, some of these references might pass by unnoticed. But have no fear—all the classic bits (cheesecake, St. Olaf, “picture it”) and all your favorite insults are here in spades, some of them taken directly from the TV show. If a few are perhaps more explicit than the original (to my recollection, The Golden Girls never used the word “cameltoe”), even these stay true to the spirit, and would absolutely make sense were The Golden Girls still running today.

Unfortunately, the talented cast and the fond memories don’t prevent That Golden Girls Show! from feeling a bit long. Now, as anyone who has hunkered down for a Golden Girls marathon on Lifetime knows, it’s easy to spend hours with these characters. So the problem with That Golden Girls Show! isn’t its length, exactly. It’s the structure of Rockefeller’s writing. In any episode of the TV show, you can identify the A and B plot lines within the first few minutes; it’s clear where the episode is going, and that’s part of the fun. Such isn’t the case here—even halfway through, it is difficult to identify just what the main storyline is. By the end, it becomes clear that Stan’s need for a spouse in order to secure his inheritance is in fact a major plot line, but for much of the play, the story meanders from one joke to the next. Rockefeller’s desire to work in as many references as possible have clearly trumped the demand for a tight narrative; he might have done better to write a few shorter unconnected episodes, or perhaps a “very special” two-parter.

That The Golden Girls was also quite progressive for its day (hell, it’s progressive in 2016) is often overshadowed by the show’s humor. It’s a show where four “women of a certain age” form a stronger bond amongst each other than they do with any ex-husbands or kids; this aspect of “family from scratch” is one of the reasons queer folk, among others, find so much to love in it. And as it comes to its conclusion, That Golden Girls Show! certainly makes sure to emphasize this element. Clearly, Rockefeller is quite aware of why so many people love this show; if only his love for it didn’t overtake his attention to storytelling.

(That Golden Girls Show!—A Puppet Parody plays at the DR2 Theatre, 103 East 15th Street, through December 31, 2017. Running time is about 90 minutes. Performances are Mondays, Tuesdays, and Thursdays at 7:30; Fridays at 7:30 and 10; Saturdays at 3 and 8; and Sundays at 3. There are some changes around the holidays. Tickets are $69; $99 for VIP (free drink, photo op, and front row seats). For the full schedule, more information, and to purchase tickets visit thatgoldengirlsshow.com or call Ticketmaster at 800-982-2787.)