Taming of the Shrew

By William Shakespeare; Directed by Rebecca Patterson
Produced by The Queen's Company

Off Off Broadway, Classic Play
Runs through 5.1.16
The Wild Project, 195 East 3rd Street 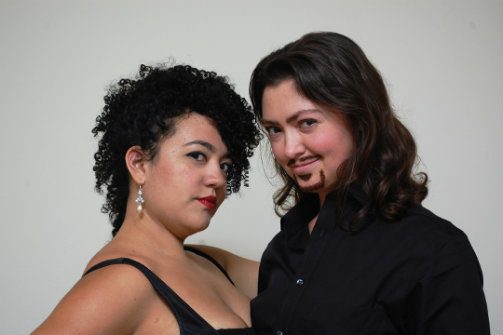 Tiffany Abercrombie and Elisabeth Preston in Taming of the Shrew. Photo by Bob Pileggi.

BOTTOM LINE: An all-female cast leads this refreshing and top-notch interpretation of one of Shakespeare’s beloved classics.

At times, a Shakespeare production in NYC can feel like an unwelcome dinner guest­—no one present is quite sure why they’re there, nothing fresh or new is brought to the party, and there’s bound to be someone equally insufferable present who claims their attendance is necessary. Thankfully, The Queen’s Company’s production of Taming of the Shrew is more like that plus one nobody knows initially, but is clamoring to be friends with by the end of the night.

In case you somehow managed to avoid hearing anything in literature class, Taming of the Shrew follows the story of Baptista and his two polar-opposite daughters, Katharina and Bianca. Suitors Gremio, Hortensio, and Lucentio, who all wish to court fair Bianca, visit Baptista’s household. However, daddy Baptista declares that no man shall call Bianca wife until his older, “cursed” daughter Katharina is wed first. Enter Petruchio, a Veronan man’s man, who hears of Katharina’s enormous dowry and makes it his personal conquest to break her feisty spirit into wifedom. Shakespeare’s wacky romantic comedy continues from there, ultimately concluding with character revelations, happy endings abound, and misogyny victorious!

Director Rebecca Patterson’s production of Shrew is revolutionary before any of her actors even open their mouths. The show is produced by The Queen’s Company—NYC’s first all-female classical theatre company. Being a play centered on the idea of female domination and ownership by the hands of men, Patterson’s direction takes the piece to a new and intriguing level, and instead focuses on the difference between love and dominance in relationships. Through the sometimes hilarious and sometimes devastating volleys between Katharina (Tiffany Abercrombie) and Petruchio (Elisabeth Preston), we witness the disappearance of love in relationships when control is the main tactic.

If you appreciate Shakespeare when done properly, you will absolutely love this production. It’s clear that Patterson understands the mechanics of Shakespeare’s language, and has pieced together an ensemble that delivers. Each and every actor delivers their lines with their entire body, resulting in a very physical and high-energy performance. When the audience is confronted by words unfamiliar to our present day vocabulary, the physicality given to us in addition enables us to never miss a beat. Our suitors Gremio (Laura E. Johnston), Hortensio (Catherine Talton), and Lucentio (Amy Driesler) engage in numerous moments of physical and vocal combat, spectacularly choreographed by Judi Lewis Ockler. Every confrontation between the three of them is engaging and authentic. In addition, their never-ceasing energy is almost exhausting to observe as an audience member.

Another thrilling observation about the ensemble in general is that strict attention is paid to the musicality of Shakespeare’s language. None of the words that leave the cast’s lips are wasted, and at times create an almost enrapturing cadence. I was most aware of this observation in Preston’s portrayal of Petruchio. When she addresses the audience every consonant is appropriately punched, and her ability to command a role traditionally played by someone twice her stature is commendable, to say the least. Her costar Abercrombie needs to receive praise on her own as well. Navigating a character existing in opposite ends of domination, Abercrombie gives us a Katharina that is incredibly finessed and fully realized. Most impressive is that, while a larger than life Shakespearian character, her Katharina is somehow still relatable, never excessive, and incredibly sympathetic. A last special shout out goes to Nylda Mark. She plays several characters in the piece, including Baptista, Peter, and the Haberdasher. Each character is completely fleshed out, and manages to steal a little piece of every scene they’re in. Her Haberdasher had the audience in stitches the night I attended, myself included.

As if the production wasn’t unique enough given the company’s approach to casting, Patterson includes many touches that further elevate the presentation. The role of Bianca, Baptista’s prized daughter, is not played by an actress, but instead by a fully costumed sex-doll. While confusing initially, the metaphor of Bianca as simply a piece of property to the intended suitors is brilliant. Any time she appears onstage, various characters roughly grab her, swing her around, and literally send her flying through the air. Another detail not to be missed is the inclusion of music to the piece. During several moments throughout the evening, scenes are suddenly visited by hits from artists including Cyndi Lauper and Tina Turner. I’m sure this information may send die-hard Shakespeare fans running for the hills, but I give you my word that each song makes sense and truly does help to further the plot.

If you’re as thirsty as I was for a refreshing, fun, and genuinely entertaining new approach to a Shakespearian classic, I highly recommend you take a little trip down to the East Village.

(Taming of the Shrew plays at The Wild Project: 195 East 3rd Street, through May 1, 2016. Performances are Tuesdays through Saturdays at 8, and Sundays at 3. Tickets are $18, sold 2 for 1 on Tuesdays, and are available at web.ovationtix.com/trs/pr/955525. For more information visit queenscompany.org/)

Taming of the Shrew is by William Shakespeare. Directed by Rebecca Patterson. Assistant Director is Madeleine Saidenberg. Choreography is by Judi Lewis Ockler. Set Design is by Angelica Borrero. Lighting Design is by Alberto Ruiz. Sound Design is by Beth Lake. Costume Designer is Elizabeth Flores. Stage Manager is Veronica Gheller.