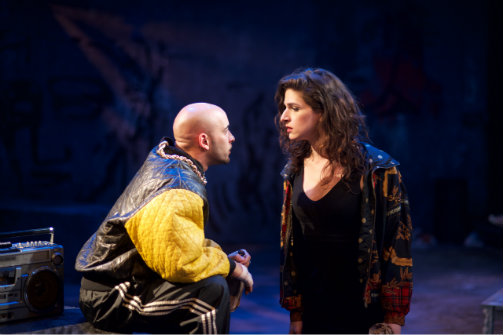 BOTTOM LINE: A vogue-tastic window into the 1980s on the Hudson Piers.

We are in 1988 New York, on a dilapidated pier on the West Side Highway, where legends are made. The world of Pia Scala-Zankel’s play Street Children, directed by Jenna Worsham, is that of the so-called Harlem Ballroom scene—a defining moment and movement in LGBTQ history. Here, amidst the ruins of a city that rejects them and surrounded with graffitied portraits of Roman goddesses, we meet the three central characters: Jamie, Angela and Terrence Diamante, performed by Eve Lindley, JP Moraga and Victor Almanzar, respectively.

The three Diamante “children” are part of a street family; they have found each other as lifeboats to cling to while they drowned in oppression because of their race, their poverty, their queerness and gender. The play opens following the tragic death of their street mother, Gina. Luckily for the audience, flashbacks and moments of fantasy allow us to witness the eminence of this ballroom legend, performed by the haunting MJ Rodriguez. With the last name Diamante, the family takes control of who they truly are as opposed to how they are seen: diamonds are the opposite of throwaways, the symbol of resilience and value.

Questions of authenticity run through the children's storylines as they search for what constitutes their “true” identity. For Angela, her search brings her back to her childhood home, where her little sister Lala (played by Yadira Guevara-Prip) meets her with skepticism and fear. In this scene, we see Angela “playing” her former self, Felix, so as to reassure her sister who is unaware of Angela’s trans identity. The scene is a complex comment on who gets to decide what our “real” selves are.

Meanwhile, Terrence battles with the demons that plague him: internalized homophobia and transphobia, hyper-masculinity and pure anger. These lead him to acts of violence, committed by a self he struggles to recognize. Finally, Jamie, who everyone agrees “passes” as female seamlessly, must decide whether the pier that begat her new and more authentic life is still her home now that she has gone from street child to street orphan. Can she be her own self and function outside the family? Together, Terrence, Jamie and Angela try on different identities, different ways to define themselves in a time before the nuanced vocabulary we have today existed.

Street Children is an invitation to witness a world where drugs, prostitution and disease co-exist with pure joy, love, power and Versace heels. The outstanding diverse ensemble constantly populates the deep New Ohio stage, going about their lives and participating in sumptuous scenes of vogue dancing, choreographed by cast members Rodriguez and Tamara Williams. I found myself being drawn in completely by these ghost-like figures onstage, wondering, “What’s their story?”

Voguing is the heartbeat of this play. It is the tool each character uses to declare themselves as present, radical, resilient and beautiful. With vogue as her M.O. or gestus, Worsham perfectly propels the play forward with explosions of energy. Her poignant choices are aided tremendously by the design team, who has created the ideal world for Scala-Zankel’s words. It’s worth experiencing the play for the voguing alone, though nothing can take away from the lead characters’ performances. Lindley is statuesque in her beauty and presence, her childlike vulnerability subtly shining through the cracks of her poised adult body: hers is a rare performance. Almanzar’s interpretation of Terrence’s tug-of-war between tough guy and teddy bear is aptly awkward and JP Moraga’s work in crafting Angela’s longing for affirmation and respite from grief is remarkable. I should also mention Guevara-Prip, who impresses with the effortlessness of her performance—a real gem.

Street Children is a timely piece, presented just blocks from where these stories are rooted. It is an important chapter of American history, one that is painfully invisible from our collective memories. Go see it.

(Street Children plays at New Ohio Theater, 154 Christopher Street, through December 17, 2016. The running time is 90 minutes with no intermission. Performances are Tuesdays though Saturdays at 7:30pm. Tickets are $28, $18 for students, and can be purchased at VertigoTheater.org or by calling 866-811-4111.)