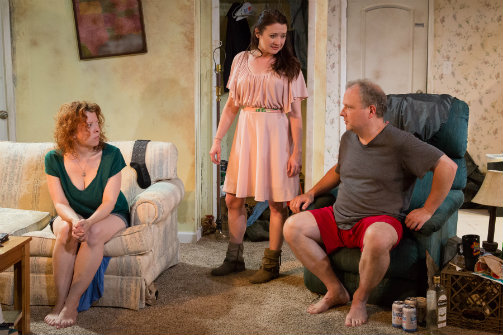 As the audience filters into the theater for Anne Adams’ award-winning Strange Country, they see a disheveled man sleeping on stage. Head back, arm carelessly slung over his forehead, he appears dead to the world. As he nestles into his recliner, apparently oblivious, we have a chance to peruse his environment. It’s a mess. The pictures on the wall are lopsided, there are empty beer cans and liquor bottles on every surface, and random items of clothing are strewn about—a sock here, a t-shirt and pair of jeans there.  If this is a reflection of the guy’s inner turmoil, we know we’re in for something explosive.

As it turns out, the man we’ve been watching is Darryl (played with remarkably controlled volatility by Sidney Williams), a depressed, middle-aged sad-sack who has suffered more than a few body blows. As Strange Country unfolds we learn that Darryl is a divorced alcoholic and drug abuser who has not seen his only child in seven years. He’s bitter, lonely, and feels betrayed by pretty much everyone. Now, however, he is supposed to put on a happy face and attend his parent’s recommitment ceremony, an event he likens to torture.

His sister Tiffany (beautifully enacted by Vanessa Vache) is trying to get Darryl to clean up his act and, for just one day, suck it up, smile at the guests, and pretend to enjoy himself. With her is her girlfriend Jamie (Bethany Geraghty, whose taut fragility is laced with insecurity and fury), and as the three interact, hurts old and new come to the fore. Suffice it to say that allegiances frequently switch: Are the siblings rivals or allies? Is the couple in love or is their union on the cusp of imploding?

Taut dialogue, more than a few one-line zingers, and unpredictable twists keep this from being a run-of-the-mill play about family dysfunction.  What’s more, the chemistry between the three characters is pitch-perfect. Even more striking, Jay Stull’s direction takes full advantage of the actor’s physicality, and relies upon movement and body language to convey what words do not.  Similarly, Brian Dudkiewicz’s effective set design wordlessly reveals the depths of Darryl’s despair, leaving the audience to feel both loathing and compassion for the turns his life has taken.

It’s a terrific production.  Deeply moving, fast-paced, and evocative, Strange Country exposes the many ways we wound one another, both intentionally and not.

(Strange Country plays at Access Theater, 380 Broadway, 4th Floor, through August 13, 2016. The running time is 90 minutes with no intermission. Performances are Wednesdays through Saturdays at 8. Tickets are $15 ($30 reserved seating) and are available from brownpapertickets.com or by calling 630-632-1459. For more information visit NewLightTheaterProject.com.)

The cast is Bethany Geraghty, Vanessa Vache, and Sidney Williams.