She Stoops to Conquer

By Oliver Goldsmith; Adapted and Directed by Scott Alan Evans
Produced by The Actors Theater Company 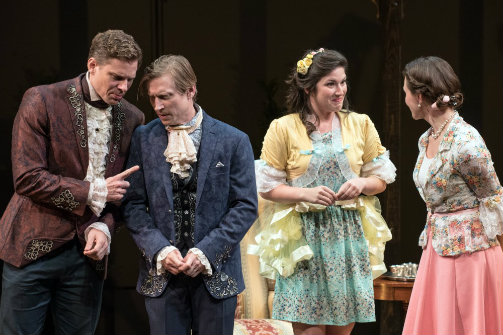 The Actors Theater Company (TACT), with a new adaptation from director Scott Alan Evans, has breathed new life into a piece from an often-overlooked period of the English theatre. Oliver Goldsmith’s She Stoops to Conquer first premiered in 1773, a time when sentimentalist plays that preached good morals were much in vogue. Goldsmith, in direct defiance of this aesthetic, sought to infuse the theater once again with the joy and bawdiness of the late restoration comedies. Striking the same note, the cast and crew of She Stoops to Conquer has managed to execute a purely delightful production at a time when the theater is too often used as a soapbox.

The action unfurls as follows: Mr. Hardcastle has arranged to bring a suitor to his estate in the English countryside for his daughter Kate. The suitor, Mr. Charles Marlow, has a reputation for being painfully shy and well-mannered but, as we soon find out, his timidity is reserved merely for women of high status. Gleaning this, Kate pretends to be a barmaid, coaxing Charles into his most “impudent” self under false pretenses (hence, “stooping to conquer”). Meanwhile, Mrs. Hardcastle is attempting to match her son, Tony Lumpkin, with his cousin Constance Neville. The two cousins have a hilarious distaste for one another; Constance is in love with Marlow’s handsome traveling companion, George Hastings. On top of all of this, the irreverent Tony has convinced the two young suitors that the Hardcastle estate is in fact an inn, leading Marlow to treat his prospective father-in-law as a batty innkeeper. Scott Alan Evans’ direction places this whirlwind of actions in full view, keeping all actors in sight of the audience for the entire show, allowing them to occasionally chime in with sound effects, bit characters, and musical accompaniment.

As much as I loved this production, a late eighteenth-century comedy of manners may obviously not be for everyone. Younger viewers, especially children, will have a difficult time sorting out some of the details, many of which are buried in social constructs that have been long forgotten. Occasionally the show falls victim to the classic symptom of two or more characters, downstage center, speaking directly to the audience (yet also somehow to each other). For a show that premiered in 1773, however, it holds up remarkably well. The characters—regardless of gender or stature—carry more agency and depth than many in famous American plays from the 1930s and 40s. Yes, the women are all completely concerned with men, but the men are just as hopelessly concerned with women, and ultimately it’s the female protagonist (Kate) who owns the main conquest.

The cast knows exactly what they’re doing, and the chemistry between one another allows the story to flow freely, using the poetic language to their advantage instead of allowing it to stilt the action. At the same time, Scott Alan Evans’ direction allows certain moments to sizzle and pop, taking full advantage of the overtly theatrical world cultivated throughout the show. Mairin Lee and Jeremy Beck play the two main lovers, Kate and Charles, and are as immediately charming to the audience as their characters are to each other. John Rothman and Cynthia Darlow, playing Mr. and Mrs. Hardcastle, are able to be simultaneously childish and proprietary as they undertake their matchmaking schemes. Justine Salata’s Constance is a joy to watch, shifting on a dime from ecstatic to crestfallen and back. Tony Roach offers a savvy but bumbling George Hastings, hopelessly trying to navigate around Mrs. Hardcastle’s wishes. Richard Thieriot’s Tony Lumpkin is the top mover and shaker throughout the show, a die-hard anarchist who delivers non-stop entertainment. James Prendergast rounds out the cast well in various roles, including Sir Charles Marlow (the suitor’s father), who—in my personal favorite moment—agrees without question to hide behind a screen in order to spy on his son.

The show's design elements work exclusively to the benefit of the story. Brett Banakis’ set design is beautifully executed, allowing the actors to make quick scenic changes, even altering the set pieces mid-scene when necessary. Patrick Kiernan’s sound design helps to fill out the world of the old English countryside, often with help from the actors themselves. Tracy Christensen’s costumes clearly delineate the characters, and Mary Louise Geiger’s lighting incorporates every dimension of the theater space.

With so much pretension clouding the modern theater, it’s easy to forget the fun in a high-status character hiding in a tiny space, or someone mistaking another’s identity. TACT’s production of She Stoops to Conquer has avoided the pitfalls that often plague period pieces, by preserving the sense of joy it was always meant to induce. The evidence of that was found, as it ever was, in the audience’s many smiling faces and nodding heads just after curtain.

(She Stoops to Conquer plays at Theatre Row's Clurman Theatre, 410 West 42nd Street, through November 5, 2016. The running time is two hours and twenty minutes with an intermission. Performances are Tuesdays at 7; Wednesdays and Thursdays at 7:30; Fridays at 8; Saturdays at 2 and 8; and Sundays at 3. Tickets are $62. and are available at telecharge.com or by calling 212-239-6200. For more information visit tactnyc.org.)

She Stoops to Conquer is by Oliver Goldsmith. Adapted and Directed by Scott Alan Evans. Set Design is by Brett Banakis. Lighting Design is by Mary Louise Geiger. Sound Design is by Patrick Kiernan. Stage Manager is Kelly Burns.