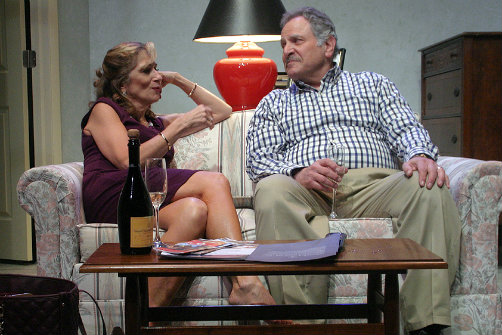 Marina Re and Bob Ari in Senior Moment. Photo by Michael Portantiere.

BOTTOM LINE: This light-hearted comedy, focused on one man's transition to an assisted living facility, provides plenty of laughs and enthralling comedy.

Coping with an aging parent, or one’s own aging, is something most people will experience at some point in their lives. Yet this theme is rarely explored on stage, perhaps because it doesn’t always make for enticing material. Senior Moment however uses one man’s move into assisted living as an opportunity for enthralling, sitcom-y humor.

Paranoid over robbers targeting the elderly, 77-year-old New Yorker Jack (Bob Ari) maces the delivery man his high-strung lawyer son Larry (Ian Lowe) sent with the groceries. Worried about his father’s well-being and fearful of potential lawsuits Jack's actions might cause, Larry begs Jack to stay in a retirement community, at least for a trial week. Jack begrudgingly obliges, expecting a terrible experience. However, once there Jack finds that many of the residents are looking for a second chance at sexual, and sometimes romantic, fulfillment.

Fellow resident Violet (Marina Re) quickly sets her sights on Jack, toting around a giant purse with ready-to-go seduction tools, including champagne and glasses. But their first tryst is interrupted by the odious Chet (Brad Bellamy), Violet’s ex-lover. Chet tells Jack that he can have Violet if he must, warning him that he better at least stay away from “the young ones”—the attractive health aides whom he bribes to give him backrubs. Yet Chet’s favorite, the pretty blonde Russian immigrant Malka (Amanda Kristin Nichols), is struck by Jack's kindness and warmth, and develops an interest in him, spawning a comedic rivalry with Chet that involves slapstick fighting, often ending with Chet being shoved or knocked out of the room. When Larry returns, sure that Jack will be itching to flee, he finds that his father is not sure he wants to, thrilled both by the sexual attention he's receiving, and his growing feelings for Violet.

Senior Moment is an enjoyable play that brings to light the experience of coping with aging and trying to grab at happiness in the short time one has left. The light-hearted, quip-filled humor is thoroughly engaging and laugh-inducing, while the script lightly hints at more serious issues like Jack’s regrets over his time spent as a husband and a father. The cast, under the direction of Donald Brenner, effectively milks every last laugh from Vogel’s script and convincingly embodies their characters. As the desperate Russian immigrant Malka, Nichols is more sincere than parodic. As Jack, Bob Ari is a pleasure to watch as he plays up his character’s stubbornness and crotchetiness. Chet and Jack’s fights provide the more hilarious moments, thanks largely to Brad Bellamy's knack for physical comedy. Costume designer Fan Zhang’s costumes are pleasing to the eye, particularly Violet’s ornate ensembles that seem reflective of the outfits an aging native New York woman would wear. With the whirlwind of emotions and drama linked to the election, New Yorkers could surely benefit from the belly laughs provided by Senior Moment.

(Senior Moment plays Theatre Row's Lion Theatre, 410 West 42nd Street, through December 4, 2016. The running time is two hours and 30 minutes with an intermission. Performances are Fridays at 8; Saturdays at 2 and 8; and Sundays at 3. Tickets are $20.25 and are available at Telecharge.com or by calling 212-239-6200. For more information visit theatrerow.org.)