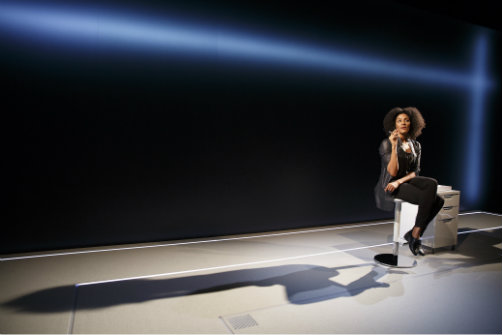 Sarah Jones, writer and performer of Sell/Buy/Date, brings the so-called feminist sex wars of the 1980s back into focus as she examines the many facets of this still-contentious issue.  Set in the indeterminate future, the play positions Jones as a professor in the Commercial Sex Department of a renowned university. Sexism is now viewed as a social disease, and the afflicted are treated by kindly physicians who reorient them toward egalitarian thinking. In addition, commercial sex is a relic of history.

On this particular day, Jones (called Serene) is agitated and distracted by personal concerns. Nonetheless, she calls her class—Intro to Feminist Porn—to order, and makes it clear that today’s session will involve watching a series of filmed interviews made with Bio Empathetic Resonant Technology, or BERT. The interviews, she continues, will allow the students to hear people’s voices, ideas, memories, and feelings. The goal? To elucidate the intricacies of sex work as it existed in the early-to-mid 21st century.  It’s a savvy construct.

Jones' ability to seamlessly transform from one character to another is mind-blowing, and that she has won Obie and Tony Awards for her prowess will surprise no one who sees this production. It’s tight, nuanced, and brilliantly-written. At the same time, its clear message—that even if sex work allows a small number of individual women to experience "agency," it does nothing to empower the toiling masses—is likely to set off fierce debate. And that’s a good thing, since the issue raises concerns not only about women’s role in society, but about men as consumers.

In Jones’s rendering, when heterosexual men indulge in paid sex, their egos suffer—after all, how good can you feel about paying someone to fake it?—and their ability to see women as equals is eroded.  Perhaps. Or perhaps this is just one element of a larger social system in which hierarchies of gender, race, and class collide with history and culture. It’s complex stuff and Jones has done a masterful job of uncovering its many layers. Indeed, while she makes no effort to hide her perspective, Sell/Buy/Date is presented with a light enough touch to encourage open and freewheeling discussion.

The end result is personal, political, and provocative and offers a utopian imagining of the expiration of sex-for-hire.  It’s a bold iteration of how we view the world’s oldest profession and a feminist take on a matter that remains unresolved.   Let the debates begin.