Off Off Broadway, Musical
Runs through 10.9.16
American Theatre of Actors, 314 West 54th Street 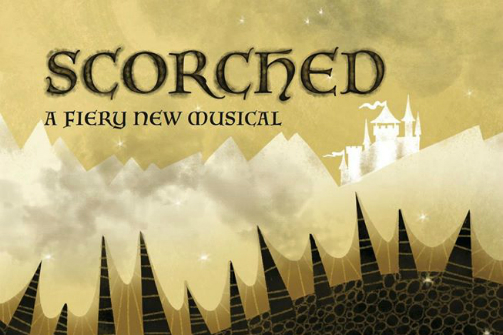 BOTTOM LINE: A fiery new musical that takes a modern approach to the telling of a fairy tale, using the themes of acceptance and pleasing ourselves over others.

Going against the grain is not normally fun, and rarely easy, but it is often necessary for our happiness. The characters of Scorched learn this lesson early on, that just because something has been done a certain way in the past, does not mean that it is right for all subsequent situations. Storybooks benefit the kingdoms, not the individual princes and princesses who are expected to marry without loving each other. However, they must do so to unite against the world's evils: dragons, witches, monsters, etc. Such is the case with Prince Edward (Sam Bolen) and Princess Alanna (Lindsay Garber) who will be married, to join the Kingdom of the East and the Kingdom of the West. Neither seems happy, but Alanna seeks the approval of her father King Robert (Brian Demar Jones), and Edward always wants to please his mother Queen Agatha (Jenelle Chu). Alanna's Lady in Waiting, the perfect Margaret (Kristian Espiritu), is also no stranger to pleasing others. With a wedding, royal abduction by a dragon, a haunted forest, and love in the mix, everyone involved needs to determine if they want to please others or themselves. Facing their fears puts each of these characters in danger, forcing them to decide who and what is most important to their safety and happiness.

Scorched accomplishes an impressive feat. It provides a stage for over thirty designers and performers, many from Yale University, to debut their work in New York City. As part of The Araca Project, these talented individuals are still clearly at the beginning of their careers, showing off what they can do in this new production, but I have confidence that we will see many of them again in Broadway theatres and on the big screen, and hear about their work across many platforms.

Live music is not guaranteed in many productions these days. Hearing the musicians interact with the performers was such a wonderful interplay. The notes from both melted together beautifully. This added a special element to the show, connecting with the audience more organically. Though most of the cast and crew involved with Scorched is talented, one actor stood out from the rest as a comedic delight. Christine Octavia Shaw, an incredibly talented woman who plays Barnie (one half of the two-headed dragon), is someone I would love to see perform again. She has personality, timing, and that je ne sais quoi. Of course, every comedian needs a straight man, so her other half, Baz, played by Connor Lounsbury, also deserves credit. They really stole the show.

Any musical, let alone a new one that is still working out the kinks, is a huge undertaking. Scorched could benefit from another edit or revision, but they have a solid foundation here with catchy songs, an interesting plot, high production values, beautiful orchestrations, and talented performers. With another run and more publicity we might just have ourselves the next big blockbuster. For now, I'll simply sit here humming “Princess Material” and chuckling to myself about “gender-confused dragons.”

(Scorched played at the American Theatre of Actors, 314 West 54th Street, through October 9, 2016. The running time was two hours and fifteen minutes with an intermission. Performances were Thursday and Friday at 8; Saturday at 2 and 8; and Sunday at 12:30. Tickets were $18. For more information visit scorchedmusical.com.)