The Ride In Masquerade

Written and Directed by Richard Humphrey 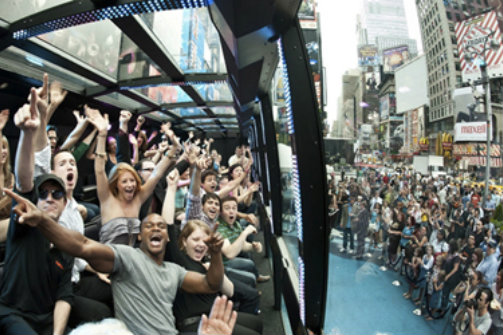 The Ride in Masquerade.

The Ride In Masquerade is a distinctive way to explore the bustling glamour of New York City's flashy lights and historic sky-rises. The Ride, which runs year-round, is in essence a theatrical bus tour of Manhattan's midtown. Passengers get on board a non-traditional tour bus and sit in theater style tiered seating facing pedestrian walkways. This yields a panoramic view of the street scenes, in which building-size technicolor moving screens, together with hustling pedestrians, become the theatrical sets and actors. Through November 6, The Ride has a fall/Halloween seasonal theme: In Masquerade.

In The Ride In Masquerade, we hear spine-chilling stories as we pass by a midtown building with a darker history. The bus itself is also interactive and has a "brain" of its own. But the most unexpected moments are when characters on the street communicate with passengers, as when a passerby near Bryant Park suddenly turns into a dancing actress, chasing the bus while she practices her next musical theatre audition. At Columbus Circle, a night scene is surprisingly accompanied by glowing ballerinas. Passing by famed musical mecca Carnegie Hall, we see a street performer on a dark corner playing an eerie, heavy vibrato on his saxophone, an otherworldly sound that gradually unfolds into a beautiful sad melody. Unpredictably, a passerby clothed in a big black veil breaks into a moving blues duet with the saxophonist. After playing a couple of deeply felt songs together, they part ways as though they have never met, like a strange dream...In this bewitched and bizarre ride, anything can happen.

Some of the best moments are the songs on the bus; there could be more, since clearly the moderators exhibit vocal talents. I also craved more street performances, even if the lack of any storyline means there is no connection from one performance to another. And the current entertainments are difficult to see during the night tours. Given that the most visually memorable moment is when a performer is lit up against the night city-scape, more visible night-time costumes would greatly enhance the tour's visual aspects. Finally, although it's clear that this experience isn't meant as an informational tour, I would love to learn more about the beautiful buildings of midtown.

If you are visiting New York and want a unique bus tour of midtown and Times Square, The Ride In Masquerade is an interesting excursion. An uncommon bus ride through the craziness of Times Square, The Ride lets you sit back, relax, and take in the wonders of being at the center of the world, without the hassle.