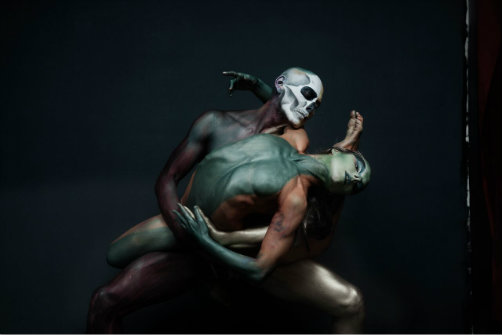 BOTTOM LINE: A lavish, innovative, and semi-successful blend of acrobatics and dance with a Mayan theme.

Rites of Passage is a new full-length dance piece by the Dzul Dance company. Dzul Dance combines dance with aerial and floor acrobatics in an homage to pre-Hispanic indigenous culture. This particular performance aims to honor traditional Mayan rituals. The show is original, lush, and expansive, but the movement is of uneven quality.

The most unusual aspect of the performance is its exploration of Mayan culture, which is inspired by Artistic Director Javier Dzul’s direct experience growing up in the Mexican jungle. This Mayan focus is exciting but limited. It is mostly conveyed through the costumes, designed by Dzul, along with beautiful, elaborate headdresses and body paint (Darell Thorne); the adornment of a dancer (Katherine Crockett) with live snakes in one section is especially stunning. The lighting (Kate Ashton) also lends an ancient and magical feel to the work.

It is disappointing that the movement itself does not also clearly invoke Mayan ways of life. Though the piece intends to directly represent various Mayan rituals, it is impossible to tell which section corresponds to which ritual, or even that there are specific rituals being portrayed at all, without the aid of the program notes. Despite this failure of concrete storytelling, the show is fully coherent, with recurring motifs and strong aesthetic choices.

Aside from an engaging solo by guest dancer Kurt Douglas, the performance, especially the aerial portions, does not seem to incorporate the staccato movement typical of traditional Mayan dance in a significant way. Dzul’s choreography is nevertheless rich. It is highly musical and sensual, evoking a sense of mystery appropriate to a show about ceremony. Rites of Passage is also one of those rare performances that is dramatic without being over-dramatic, due to the pairing of dynamic movement with minimal expressivity. The choreography stems from physicality, rather than emotion or narrative. In some sections, this is quite successfully executed. For example, all of the solos by male dancers are striking, and Crockett also stands out for her formidable stage presence and seamless transitions. Beyond that, an aerial performance on two metal chains (Summer Lacy) is athletic, gorgeous, and unique. Most of the other aerial performances are also well done, and the solo and partner-supported contortion near the end of the show (Anna Venizelos) is fluid and impressive.

Unfortunately, not all of the movement is as strong. Notably, there is one disturbing part of the piece in which Dzul portrays the Old God. Though this is a Mayan religious figure, the performance comes across as a caricature of a disabled elderly person. Despite the context, having a dexterous young person play this role in order to captivate the audience is deeply uncomfortable and detracts from the show. Furthermore, most of the dancers do not appear as highly trained as Douglas and Crockett, likely because some of them are primarily circus artists rather than dancers. In addition, much of the floor acrobatics is basic, and even occasionally shaky or uncoordinated. Overall, the acrobatics are good by dance standards but pale in comparison to actual circuses; similarly, the dancing is largely solid for circus artists but does not quite meet the standard of major dance companies. It is incredibly ambitious to combine dance and acrobatics in one piece, and Rites of Passage falls short of achieving consistent excellence in both categories. However, it contains enough breathtaking moments and sheer inventiveness to make it worth seeing.

(Rites of Passage played at the Gerald W. Lynch Theater, 524 West 59th Street, on September 24, 2016 at 8. The show ran 1 hour 10 minutes with no intermission. Tickets were $30 for general admission, $25 for CUNY students, faculty, and staff, and $10 for John Jay College students, faculty, and staff, and were available at dzul.eventbrite.com. For more information visit dzuldance.com.)

Rites of Passage is by Dzul Dance, under the artistic direction of Javier Dzul. Choreographed by Javier Dzul. Costumes by Javier Dzul. Masks and body paint by Darrell Thorne. Lighting design by Kate Ashton. Presented by John Jay College and CUNY Dance initiative.